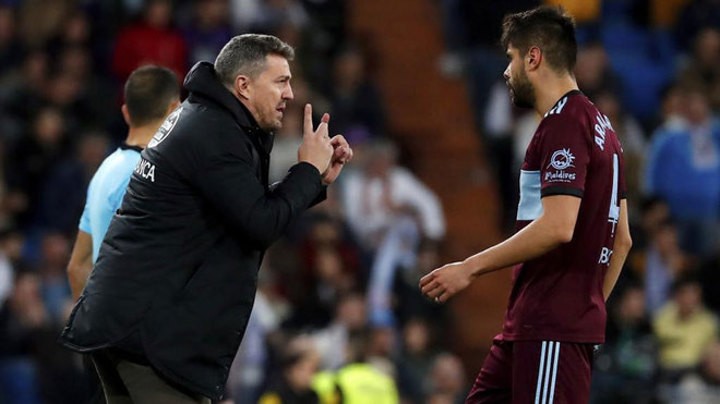 Celta Vigo coach Oscar Garcia left the Estadio Santiago Bernabeu a happy man on Sunday evening after picking up a valuable point in a 2-2 draw with Real Madrid.

Some claimed it could have been more, particularly as they appealed for a red card for Gareth Bale after a strong challenge, but the coach would not comment on that incident.

"I prefer not to talk about the tackle, I don't know what would've happened in reverse, but it wasn't a decisive moment," Garcia insisted.

Moving on swiftly from that topic, he was keen to praise the mental strength of his players to achieve the result.

"It's an important point because it shows character, not giving up," Garcia explained.

"In the first half Ruben [Blanco] didn't have to make a save; in the second they pressured us more and scored twice, but the team showed character to get away [and score a goal to equalise]."

Despite that, Garcia would not be drawn into criticising Real Madrid as he was adamant that his team's merit earned them the point.

"I always see Real Madrid as good, you have to look at that [Eden] Hazard goes off and Vinicius [Junior] come on," he said.

"More than to take credit away from them, it's to say we played a very good game; I haven't had a feeling of Madrid being a fragile or weak team."

Celta's next fixture will be a six-pointer against relegation rivals Leganes.