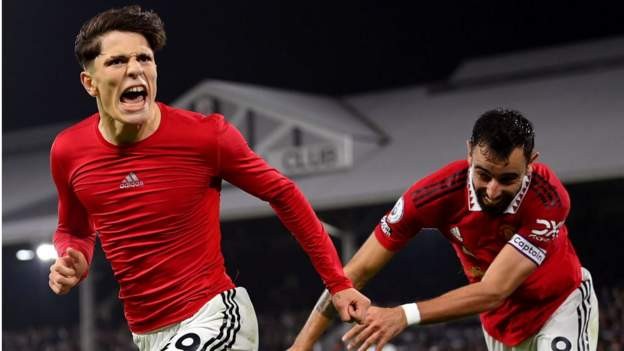 In a pulsating second half at Craven Cottage, Fulham looked to have earned a point before the 18-year-old Argentine raced through and arrowed a shot into the bottom corner past Bernd Leno.

Fulham's Dan James had earlier came off the bench to grab an equaliser from Tom Cairney's low cross to give the hosts what looked to be a well-deserved point after David de Gea had made a number of fine saves.

Christian Eriksen, who suffered a cardiac arrest during a Euro 2020 match for Denmark against Finland in June 2021, had put the visitors ahead in the first half with his first United goal, sliding in to finish at the back post from a low cross from Bruno Fernandes.

But Garnacho's winner with practically the last kick of the match gave United the three points.

The Premier League now takes a six-week break because of the Qatar World Cup, which begins on 20 November, with no domestic top-flight matches until 26 December.

The win leaves United fifth, 11 points behind leaders Arsenal and three points behind fourth-placed Tottenham with a game in hand on Antonio Conte's side.

Fulham have either been promoted to or relegated from the Premier League in each of the previous five seasons, but are well placed to end that up-and-down run as they sit ninth, having already matched the five wins they gained in their previous top-flight campaign in 2020-21.

The result was harsh on Fulham, who had looked to be getting another excellent result at home after they had won three times at Craven Cottage and drawn 2-2 with Liverpool in the opening match of the season.

But Garnacho, who has represented both Spain and Argentina at younger age groups, scored his first Premier League goal to enhance his rapidly blossoming reputation.

He only made his United debut in April, scored his first goal for the club against Real Sociedad in the Europa League 10 days ago and produced an impressive late cameo, providing two assists, in United's 4-2 Carabao Cup win over Aston Villa on Thursday.

But United needed a superb performance from De Gea - overlooked for the Spain World Cup squad - to keep Fulham from taking the lead as the hosts played superbly in the second half after James, who spent two years with United, equalised.

United have 14 players that have been named in squads for Qatar, but Portugal's Cristiano Ronaldo was again not involved because of illness, which also kept him out of Thursday's match.

Fulham were without top goalscorer Aleksandar Mitrovic, who has scored nine goals in 12 Premier League games this season, as his foot injury again ruled him out, with the Serbia striker hoping to be fit for his country's World Cup opener against Brazil on 24 November.

There will now be no top-flight football until 26 December but this match was a dramatic, thrilling way for the first half of a Premier League season like no other to come to a halt.

Goal! Fulham 1, Manchester United 2. Alejandro Garnacho (Manchester United) left footed shot from the centre of the box to the bottom right corner. Assisted by Christian Eriksen with a through ball.

Attempt saved. Scott McTominay (Manchester United) header from outside the box is saved in the centre of the goal.

João Palhinha (Fulham) wins a free kick in the defensive half.

Carlos Vinícius (Fulham) wins a free kick in the defensive half.

Casemiro (Manchester United) wins a free kick in the defensive half.

Christian Eriksen (Manchester United) wins a free kick in the defensive half.

Attempt missed. João Palhinha (Fulham) header from the centre of the box is high and wide to the right. Assisted by Andreas Pereira with a cross following a set piece situation.