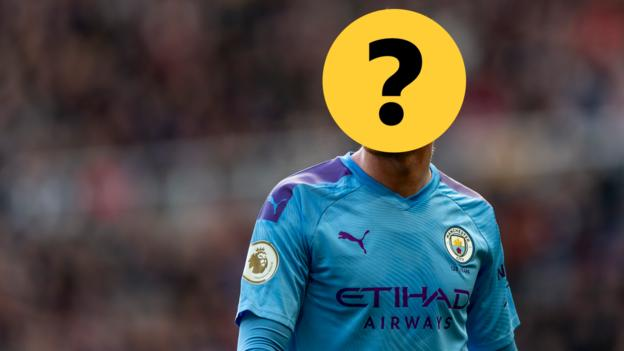 Liverpool are eight points clear at the top of the Premier League thanks to their 2-1 win over Brighton on Saturday.

Then Leicester City moved back into second with a dramatic 2-1 win over Everton on Sunday.

Defending champions Manchester City are in third, 11 points behind the leaders after drawing 2-2 at Newcastle.

Arsenal fought back to draw 2-2 at Norwich, Wolves drew 1-1 with Sheffield United and Manchester United also drew 1-1 with Aston Villa.

Burnley lost 2-0 to Crystal Palace and Southampton came back to win 2-1 against Watford.

Here's my team of the week - have a read and then select your own below.

Martin: Who would have thought that a 33-year-old, third-choice goalkeeper, on a free transfer from arch-rivals Millwall would save the day by keeping a clean sheet for West Ham at Chelsea?

I can only think of one person who thought this was remotely possible and that was former defender Alvin Martin who sat in the stands watching his son make his Premier League debut at a packed Stamford Bridge. David Martin stepped into the breach for the Hammers and performed brilliantly. His double save in the first half was crucial but it was his decision making and bravery in the second half that impressed me most.

Football can be a cruel and ruthless sport and Martin would do well to not blow this opportunity by listening to the hype.

Did you know? Aged 33 years and 312 days, Martin was the second oldest goalkeeper to keep a clean sheet on his Premier League debut, behind only Bernard Lama (34y 329d), who also did so for West Ham in March 1998.

Alexander-Arnold: I don't think I have seen a young lad with the ability to place a dead ball precisely where he wants it to go - and with such quality - since Glenn Hoddle. Alexander-Arnold's crosses and balls into the danger areas are having a devastating effect on the opposition.

His two assists for Virgil van Dijk were just out of this world. The problem with free-kicks, and corners of course, is a defence can do very little about how they are taken. This local lad is proving to be a bit special. I just wish Liverpool fans would chant his name more. Even with a name like Trent Alexander-Arnold, it can't be that difficult.

Did you know? Since the start of last season, no player has provided more Premier League assists than Alexander-Arnold (17).

Van Dijk: We've seen Virgil van Dijk marshal his defence with grace and tackle like a steam train when needed but I have never seen him score two headers like a striker before.

The way he took his second goal from another beautifully delivered Alexander-Arnold ball was superb. John Toshack couldn't have put the ball into the net any better. Brighton were 2-0 down before they had time to draw breath. What took place thereafter was immaterial. Liverpool are far too ruthless these days to let these games slip through their fingers even with 10 men.

Did you know? Since the start of last season, Van Dijk has scored more Premier League goals than any other defender (seven).

Cresswell: Just when you thought the youngsters at Chelsea were making real progress, an incident comes along to remind them that the game is not as easy or as straightforward as they thought.

A London derby defeat at home to a West Ham side in desperate need of points was that very occasion and it would have hurt. Reece James has looked impressive for the Blues when he has been called on but he fell for Aaron Cresswell's feint to shoot with his favoured, and deadly, left foot.

Cresswell then checked back to bury a superb strike on his right side. This was an outstanding performance by West Ham and Cresswell in particular.

Did you know? West Ham's Cresswell has scored three goals in just nine Premier League appearances this season, his best ever scoring return in a single campaign in the competition.

Ward-Prowse: I thought this was a crucial three points for Southampton boss Ralph Hasenhüttl but it proved a fatal loss for Watford's Quique Sánchez Flores.

Just as well James Ward-Prowse was in sparkling form for the Saints, the England international scored Southampton's winner with a beautifully taken free-kick and practically ran the show in the second half.

What took place at St Mary's was a travesty for Sánchez Flores, who lost his job after a handball was missed by VAR. The only thing clear about this technology is it is proving to be a hindrance and helping no-one.

Did you know? Only Matt Le Tissier (seven) has scored more direct free-kick goals for Southampton in the Premier League than Ward-Prowse (five).

Grealish: After the attention paid to Jack Grealish by Manchester United, I think he is entitled to danger money! I can't remember when a team have inflicted so many tackles on a single player. I suppose Grealish should take that as a compliment.

The Aston Villa captain scored a wonderful goal, had a fabulous game at Old Trafford and is precisely the sort of player United need to bolster their prospects. United fans are having to watch too many ordinary players while they are being asked to pay Champions League prices.

Did you know? Grealish has been directly involved in seven goals in the Premier League this season (three goals and four assists), the most of any English midfielder.

De Bruyne: It is over. The Premier League title is going to Liverpool. When Manchester City can't close a game out with minutes of normal time left away at Newcastle... it is over.

Even Kevin De Bruyne, without doubt the best midfield player in the country, couldn't rescue City. The Belgium international's 82nd-minute strike was of the highest quality but the rest of his team-mates, with the exception of Fernandinho, seem to lack the ruthlessness of previous seasons. To see Rodri turn his back on Jonjo Shelvey as he was about to score said it all. That draw would never have occurred if Vincent Kompany had been in their ranks.

Did you know? Manchester City's De Bruyne has had a hand in six goals in six Premier League appearances against Newcastle, scoring two and assisting four.

Cantwell: Norwich should have won this game and would have, if their defenders weren't such dunderheads. Having been told by the referee not to encroach in the penalty area, after Christoph Zimmermann suffered a rush of blood to the head and handled the ball, they completely ignored the instruction.

Fortunately, there was one bright spark in the Norwich ranks and that was Todd Cantwell. His splendid second-half finish and all-round performance should have been enough to see the Gunners off and it would have done, had his team-mates allowed Tim Krul to do his job and not interfere.

Did you know? Cantwell has scored in back-to-back league games for the very first time for Norwich; he had only scored in two of his previous 25 league appearances for the club before this.

Iheanacho: If you are an Everton fan the game doesn't get more cruel than this. Kelechi Iheanacho comes onto the field for Leicester after 62 minutes and plays like a man possessed.

There was a purpose and maturity about his performance which I have not seen from him before. I know this lad can score goals, I saw that at Manchester City but his game has developed.

VAR this time decided to humiliate the linesman and overturn his decision by awarding Leicester the winning goal. I've seen similar decisions ruled offside by VAR. Everton had put up a spirited performance but what this means for their manager Marco Silva is anyone's guess. Another difficult week for Silva I'm afraid.

Did you know? Iheanacho is one of only two substitutes to have scored and assisted in a Premier League game this season, along with Brighton's Leandro Trossard versus Norwich.

Aubameyang: Arsenal are in a mess. I take no pleasure in stating that unfortunate fact as they are one of the country's top clubs with a wonderful history. Fortunately they have Pierre-Emerick Aubameyang who couldn't save Unai Emery's job but did save Arsenal's blushes against Norwich at Carrow Road.

The Gabon international kept his cool under enormous pressure to finish with a retaken penalty and then pulled the Gunners from the brink of defeat with a sensational finish. However, Arsenal's performance under interim manager Freddie Ljungberg was far from convincing. As for their defending? Well that was a joke.

Did you know? Aubemeyang has won 11 points for Arsenal with his goals in the Premier League this season; the most of any player for his team in the competition.

Alli: The mere fact that Alli has appeared in my team of the week in consecutive weeks and had a memorable match in midweek against Olympiakos tells its own story.

It looks like the kid is back. Every time he receives the ball it feels like something is about to happen. That feeling has been absent in his game for some time. Against Bournemouth he should have had a hat-trick and would have done if he was at his very best so there is still some work for him to do. It does look like Mourinho is starting to have an effect.

Did you know? Alli has been directly involved in three goals in his two Premier League games for Tottenham under José Mourinho (two goals, one assist) - as many as he managed in his last 12 under former boss Mauricio Pochettino.

Now it's your turn

You've seen my selections this season. But who would you go for?

Pick your Team of the Week

Crooks of the matter

As we approach the Christmas period there doesn't appear to be too much Christmas cheer or goodwill towards Premier League club managers.

In a matter of days, top-flight bosses have been falling like ten pins. Pochettino was the first to go, followed by Emery and then Sánchez Flores - and we know Ole Gunnar Solskjaer and Silva are by no means safe. What have they done to deserve this? Not enough, seems to be the answer.

I remember the then Bolton manager, Ian Greaves, referring to the third round of the FA Cup as 'sacking time' - and it was in those days. But now no manager's job is safe at any period in the season.

To have an envelope thrown in your direction explaining the terms of your severance package and then being told, as one colleague was, 'clear your desk and get out', is about as brutal as it gets.

One minute you are the boss and the next you are out the door with a sizeable cheque perhaps but with little or no self-esteem.

Just how decent it is for any industry to treat its employees in such a fashion, regardless of its remuneration, is a cause for concern.