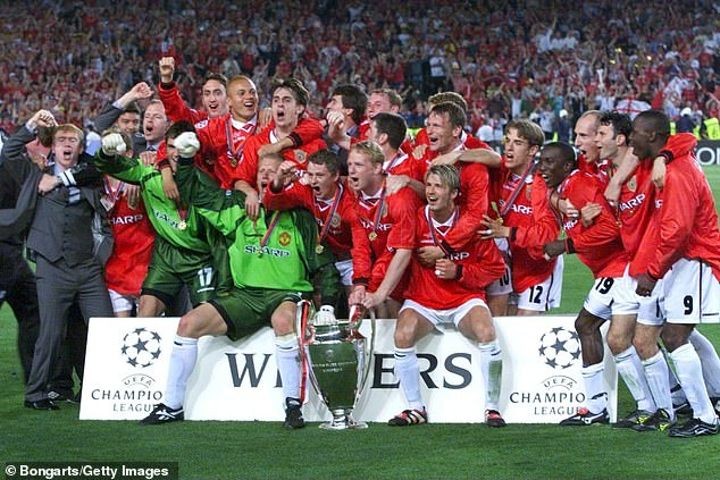 Gary Neville has opened up on his time at Manchester United, revealing how hard it was to watch his fellow 'Class of 92' players leave one-by-one over the years.

The club legend was speaking on Sky Sports' Off Script podcast, and recounted the leaving tales of David Beckham, Nicky Butt, and his brother Phil.

'Even now I feel a little bit emotional, because we'd been at United since we were young kids,' said Neville.

'I don't remember a lot of my football matches, but I remember, David, Nicky, and Phil leaving like it was yesterday.'

The Class of 92, which also included Paul Scholes and Ryan Giggs, were famous for dominating the team's line-up during the following decade after coming up through the Manchester United youth system. Their crowning achievement was winning the treble in 1999.

Beckham left Old Trafford for Real Madrid in 2003 after making 265 appearances for the club.

'I remember David leaving,' said Neville. 'He whispered to me on the pitch at the end of a game, and the newspapers lip-read it. I think his words were: 'I think they want to sell me.'

'At the time, Real Madrid and Barcelona were in for him. I said to him: "Just sign a contract." I think he wanted to go and experience one of these teams, he always saw himself beyond Manchester.

'I thought that when he left it was probably for the best because the relationship was getting a bit fraught, just generally you could see it was coming to an end.

'To this day my view has been that it was good for both parties, David and the club. But at the time I was devastated because it felt like the gang were breaking up.'

'We were on tour in America with Nicky – we knew what we were all thinking all of the time – and Nicky had become a little bit more frustrated with his 25, 30 games a season, being in and out of the team,' Neville recalls.

'He wanted to go and play for Newcastle and be No1, not a No3 or No4. He left that tour, going back to England to sign for Newcastle.

'When you see your team-mates leaving you, you know they've gone, it's extremely sad. Nicky leaving was a big disappointment, but you know it's going to happen one day.'

Gary's brother Phil soon found himself in a similar situation to Butt, leaving for Everton in 2005, a decision that led to a few tears at the home of manager Sir Alex Ferguson.

'Phil rang me up one Sunday and told me he'd made the decision to leave.

'I said: "It's a big call, you're playing for United and winning trophies," but he'd got to the same place as Nicky.

'After Phil rang me up, we actually went round to Sir Alex's house that night, the first time we'd been round, and went and saw him, and I remember there being a few tears among the family.'

Gary Neville ended up staying at Manchester United for his entire career, playing 400 times for the club.