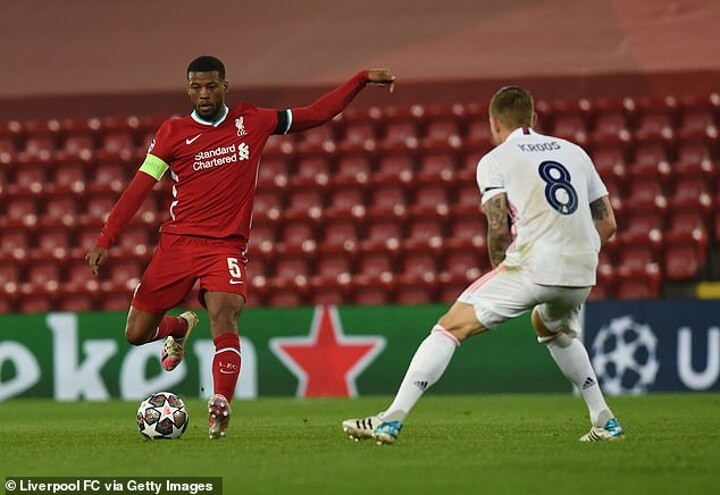 Georginio Wijnaldum is reportedly eyeing up a summer move to Barcelona due to the prospect of linking up with Lionel Messi and Memphis Depay.

The Liverpool central midfielder's contract expires this summer, and the Spanish giants have long been linked with signing him up on a free, although that move was called into question by the club's dire financial position due to the pandemic.

But according to the Mirror, the 30-year-old is enthused by the chance to play alongside star forward Messi - who looks increasingly likely to stay - and his Netherlands team-mate Depay, and has told friends back in the country as much.

Barcelona manager Ronald Koeman has long admired Wijnaldum and the pair worked together while Koeman was Netherlands boss.

He played Wijnaldum in a more advanced position for his country, where he excelled and linked up nicely in the No 10 position with Lyon forward Depay.

New Barcelona president Joan Laporta has informed Koeman there will be a restricted transfer budget this summer with the club more than £1billion in debt after years of heavy spending, and exacerbated by the impact of Covid-19.

However, with Wijnaldum and Depay both out of contract the pair could move for free transfers, a year after Koeman made it clear he wanted to sign both.

Moreover, the Spanish giants have been able to work out a three-year deal which fits their pay structure with agent Humphrey Nijman- with the length of contract key as Liverpool are reluctant to put forward anything longer than a two-year contract.

The 73-cap international has become part of the furniture at Anfield since his £25million switch from Newcastle in 2016, playing 230 times in all competitions and scoring 22 goals.

He is a trusted, reliable and consistent option in midfield, with Reds boss Jurgen Klopp keen for him to stay after he helped the side win the Premier League and Champions League.

Koeman's side thrashed Athletic Bilbao 4-0 on Saturday to secure the Copa del Rey, with Messi front and centre after scoring twice.

Next up Liverpool face Leeds on Monday before entertaining Newcastle on Saturday in the Premier League, desperate to make the top four and secure Champions League qualification for next season.