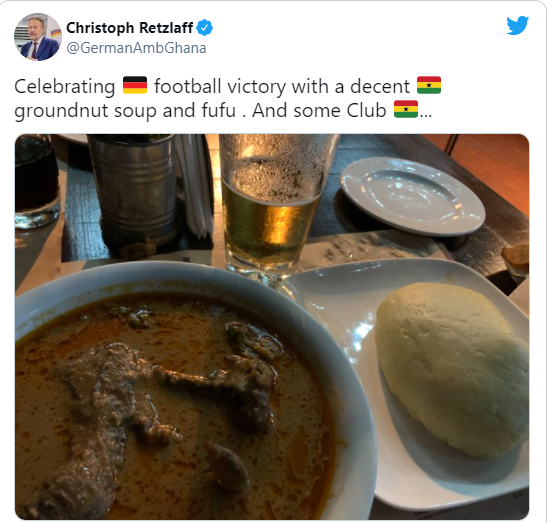 The German Ambassador to Ghana Christoph Retzlaff celebrated his side's win against Portugal on Saturday in a bizarre way with one of Ghana's favorite and popular dishes, fufu and groundnut soup.

The 2014 FIFA World Cup champions got their Euro campaign to a bright start with a win against defending champions Portugal in their second group game.

It was a must-win game for Germany after losing to 2018 World Champions France in the group opener.

Cristiano Ronaldo had put the visitors ahead, continuing his record-breaking campaign with his third goal of the tournament and 12th European Championship strike of all time.

But two own goals in the space of five first-half minutes flipped an entertaining encounter in Germany's favor, as first Ruben Dias and then Raphael Guerreiro turned into their own net.

The influential Gosens laid on a third immediately after the break with an inviting ball that allowed Kai Havertz to tap in from close range, before heading in Germany's fourth himself.

Diogo Jota poked in from Ronaldo's cutback but the defending champions were unable to mount a comeback.