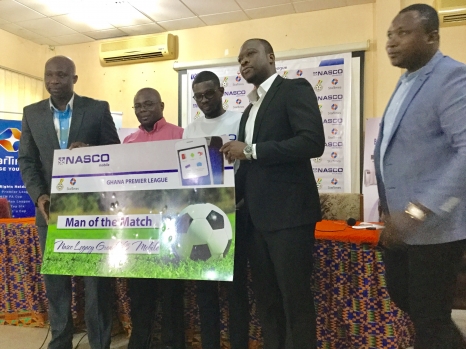 The Technical Department of the Ghana FA is overly angry and splenetic with the Premier League Board over the latter’s decision to name player and coach of the month in the ongoing Ghana Premier League without their input.

Reports reaching GHANAsoccernet.com have it that the leadership of the GFA’s Technical Department was not involved in the selection of who becomes the player of the month of the coach of the month, hence their extreme waspishness.

This sharp splenetic attitude from the Technical Department of the FA follows the PLB’s announcement of player and coach of the nominees for April.

The Ghana Football Association (GFA), last week, signed a four year agreement with electronic distribution giants Electroland Ghana Limited, for one of its flagship product, NASCO to become Official Man of the Match Sponsor of the Ghana Premier League.

The deal worth GHC253,000 will see each Man of the Match receiving a brand new phone from NASCO every week for the remainder of the season and for subsequent seasons.

Following the announcement of the nominees, many pundits of the local game have subjected the GFA and the PLB to massive criticism questioning the criteria of selecting the nominees.

As if that is not enough, insiders at the Technical Department have disclosed to GHANAsoccernet that the PLB has invited their anger as they see the announcement of the nominees as a massive show of disrespect to the department.

According to them, they are responsible for every technical decision about football in the country and insist the PLB should have consulted them for their consent before coming out with the nominees.

GHANAsoccernet investigations have revealed that the head of the Technical Department of the FA, Francis Oti Akenten, is currently in Cameroon on CAF technical duties and will hold a meeting with the PLB as soon as he arrives in the country.

Further checks revealed that the Technical Department is hugely boiling with anger as this is not the first time they are being neglected by the PLB in technical matters, with the coach and players of the season also being a major issue.

This is the first time the GHPL Man of the Match, player and coach of the month have received such a massive sponsorship and it is expected to boost the performance of players and coaches in the` league.

Both parties are, therefore, expected to hold a round table discussion to sustain the positive step by NASCO immediately to avoid putting the initiative into disrepute.