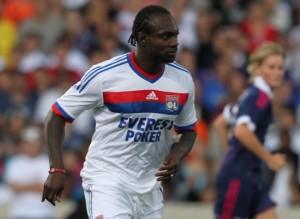 Ghana captain John Mensah is considering quitting Lyon this summer despite having one year left on his contract with the French side.

The strong centre-back's agent Fabian Piveteau has already held talks with the giants about mutually terminating the contract to pave the way for him to leave.

According to Mensah, the two sides have reached an agreement over his departure but are yet to formalise the deal.

The permanent Ghana captain says his persistent back injuries have forced him to take the decision of moving on.

â€œI am in talks with my agent Fabian and we are considering some factors before we arrive at decision whether am moving or not," Mensah said on his personal website.

â€œThe idea of parting with Lyon has arisen due to my frequent injuries, I discussed the issue with my employers and my agent and they were in support of my decision.â€

The decision to quit Lyon will give him the time to treat his back problems which, it is believed, is the cause of all his ligament problems.

But many believe that given his performances, the decision to leave him on the club's bench even when he is fully fit might have forced the decision too as well.

If he treats his injuries, Mensah will not lack employers as he is highly regarded worldwide following his exploits in the English Premier League with Sunderland and with the Black Stars

His contribution in the last Nations Cup was phenomenal, scoring two important goals for his country, which led to him named among the best XI at the tournament in Gabon and Equatorial Guinea.