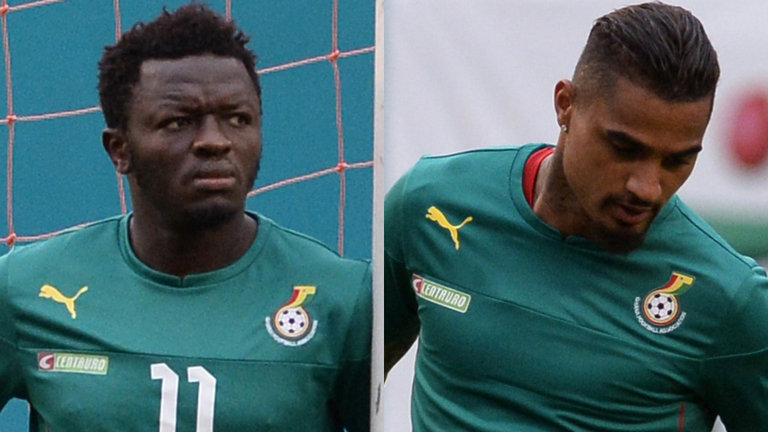 The call for the return of Sulley Muntari and Kevin-Prince Boateng into the senior national team the Black Stars as the 2019 Africa Cup of Nations draws nearer has created some division among Ghanaian fans concerning their inclusion into the squad.

The two players were suspended indefinitely from the Black Stars after the 2014 World Cup in Brazil and have not featured in any game since then for the national team.

In recent times, there have been rumours that the duo are set to be included in the Black Stars squad for the AFCON based on recommendation from the Normalisation Committee President Kofi Amoah who confirmed this in an interview with Metro TV.

In that interview he confirmed that Sulley Muntari had called him to express his desire to play at the AFCON as well as suggested the inclusion of Kevin-Prince Boateng.

Their inclusion has generated a lot of argument with some fans championing for their inclusion while others suggest they have past their prime and the coach must rely on young and active players for the tournament.

GHANAsoccernet has sampled some views of Ghanaian fans concerning their inclusion.

Former Vice President of the Ghana Football Association Fred Pappoe on this issue stated that it is too late for Muntari to be included in this team.

"Sulley is my son and he is very dedicated but I feel the call came in a bit too late.It's too late a call to be considered and for us to spend our time discussing",

Ex- Ghana International Augustine Arhinful in an interview on Asempa FM indicated that Kevin-Prince Boateng was in good run of form when he joined Sassuolo but has been inactive since joining Barcelona in January.

KP Boateng has played few matches for Barcelona since he joined.

Experienced football administrator, Alhaji Karim Grusah also called on the return of Ghanaian duo Kevin-Prince Boateng and Sulley Ali Muntari to the Black Stars ahead of the 2019 Africa Cup Nations.

"We need him. He’s the type of player we need. To be honest, for me, he has to come. We need such kind of players in the team. We need his experience, quality and determination,” Wakaso told footballmadeinghana.com.

On the otherhand reports suggests that Ghana coach Kwesi Appiah will ignore any attempts to convince him to include Sulley Muntari and Kevin Prince Boateng in his team for 2019 AFCON.

Head coach Kwesi Appiah is expected to name his provisional squad for the tournament on 20 May.