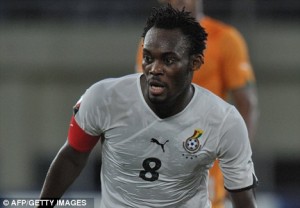 The Ghana Football Association says it will wait till the last minute to make a decision on Michael Essien concerning the 2012 Africa Cup Nations Cup finals.

Essien, 28, has been ruled out of action for six months after rupturing his anterior cruciate ligament in Chelsea training.

He is expected to miss out of the 28th edition of the continental championship which starts next January in Gabon and Equatorial Guinea.

The West London club have also insisted Essien will not be rushed back to action which means the enforcer is not likely to represent Ghana at the Nations Cup.

But Ghana Football Association spokesman Randy Abbey has revealed Ghana team doctors will be sent to London to further assess Essien's condition before a decision is made.

"We're aware the initial diagnosis says he will be out for six months. We also know how mentally strong Michael is and we are hopeful he can recover sooner. We have a good relationship with Chelsea and we will continue to talk with them about his recovery. And if we see fit to send one of our own doctors over to London, we will not hesitate to do that,'' he told the Daily Mail.

Essien recently returned from a 16-month break from international duty.