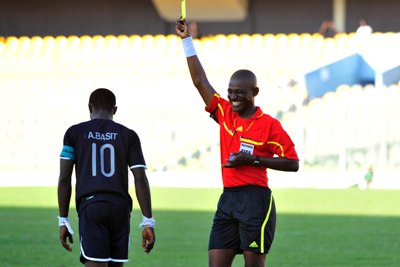 The spotlight was at the Gyemfi Park in the week nine (9) matches of the Ghana Premier League.

Leaders Asante Kotoko succumbed to the might of Edubiase FC which ended the table toppers unbeaten run.

Meanwhile Accra Hearts of Oak failed to reclaim the top spot when they drew barren with visiting Aduana Stars.

The fixture in Accra was not the only goalless draw game as Berekum Chelsea also held in form Dwarfs at the Robert Mensah Stadium.

These clubs were represented in the team of the week put together by GHANAsoccernet's SADDICK ADAMS.

The shot stopper was selected by Hans Van der Plyum ahead of first and second choices Ernest Sowah and John Mossi respectively and Iddrisu proved his worth.

He demonstrated his flair for the big saves with his first-half parry of Bismark Asiedu's fierce strike and maintained his concentration with a commanding display.

On two occasions he denied George Arthur before making a timely interception to grab the ball off the feet of Seidu Bancey in the dying minutes to secure a point for the defending champions.

Fosu made the most telling contributions of the game in what was a rare off-day for the Full-back.

The diminutive former Kotoko defender worked tirelessly on the right flanks and whipped in some decent cross.

He assisted the first goal with a brilliantly taken corner-kick in the first half before skatingÂ  past two AshGold defenders to send in the cross that resulted in the melee for home side's second.

The swift Liberty full back was the only lively product in a relatively dull encounter in the final mid-week match on Thursday at the Accra Sports Stadium.

He gave the jets defence a hell of time and was very unlucky to be on the losing side.

Gullit sent in couple of decent crosses but his partner Zubeiru Fuseini failed to capitalise on the feeds.

Coffie put up a commanding display by the Edubiase center back.

He used his intimidating stature very well to shove Ahmed Toure and Nafiu Iddrisu from his goal area especially in the first half.

Coffie not only easily quelled any threat posed by hapless Kotoko attack but also linked play very well with his midfield.

The Ghana International makes my team of the week for the second consecutive week.

Sumaila proved reliable at the back for Dwarfs while also moved forward well.

He kept the screws on Emmanuel Clottey and Nana Poku when they attacked in the middle of the dwarfs defence.

The 19-year-old made good interceptions and broke with pace on some few moments.

He was very much Edubiase's controller in the centre of the pitch, playing deeper than his partner Mumuni Abubakar.

He made good runs going forward but his main responsibility was to deal with the constantly improving Kotoko midfield marshaled by Yahaya Mohammed, something he never stopped trying to do.

He swept a very dangerous shot across the face of goal on the 25th minute after going past Yahaya and Baba Rahman but there was no connection.

Atobrah covered a lot of ground and never lost energy throughout the game.

He used his experience to keep Arthur reasonably quiet in the opening 45 minutes, and also supported his defence in handling Bancey.

The Chelsea skipper was strong in the centre of the pitch and broke up a lot of Dwarfs attacks.

Basit also showed a good eye going forward and was unlucky not to create a chance for Clottey in the opening 20 minutes when the striker blasted wide.

A strong performance in the centre of midfield alongside Stephen Amankwaah and Danjumah Gafaru, the experienced Boadu worked tirelessly to keep his side in the game.

He foiled most of the Medeama attacks and set up Gafaru's goal in the opening minutes.

The former AshantiGold midfielder pulled the strings in midfield for the Upper West side who beat the whipping boys after a slump against Hearts Of Oak on Sunday.

He dominated the midfield alongside his sidekick Seidu Salifu.

Mantey weaved in a beautiful pass which met substitute Godfred Gyasi who disposed the Wassaman goalie with 12 minutes to go in the game.

In concluding remarks on the mid fielder's performance last week, I wrote "I expect Akuffo to lift his side a bit more with such kind of performance", and he repeated his form yet again to ensure that Lions were tamed at their Kpando fortress.

He scored the controversial goal which took referee Ali Musah Plato more than five minutes to decide whether the ball really entered the post or side-netted.

The ex Kaiser Chief striker has scored braces than any other player in the league this season.

He will always be Medeama's catalyst when he is in the team.

Two more goals and continued to hold the ball up with great purpose, while always on hand to help support the likes of Hans Kouffie.

In summary, the experienced attacker was sensational.