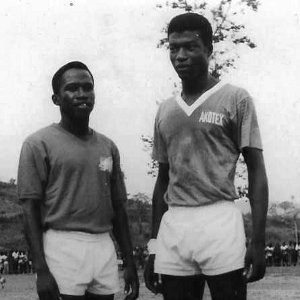 Rev. Osei Kofi (L) to be one of the beneficiaries of the President's pledge
Share

Ghana President John Mahama has pledged a GHS 1.7m (about $571,910) â€˜tokenâ€™ to be shared amongst former Black Stars players who won laurels for the nation.

This pledge was made by the President during a state ball to bid the Black Stars farewell as they embark on their third successive campaign at a World Cup this June in Brazil.

â€œIt is said that a nation that does not honour its heroes is a nation not worth dying for.

â€œAs a token for our gratitude for the service you gave to your country, I wish to assure you that your services have not been forgotten and I have asked the Chief of Staff and the Minister of Finance to make GHS 1.7m available for you.

â€œAs a token of appreciation for the work you did for us during this period and I hope that you will accept for those of you alive and for those of you gone, the families will accept the little that will be shared amongst you as a big thank you from the government and the people of Ghana.â€

The Presidentâ€™s pledge has comes in handy following series of complaints from ex players of unfulfilled promises by the state after bringing joy and honour to the nation through past Nations Cup triumphs.

Some of these heroes are now living like paupers while others died miserable deaths over lack of resources to foot expensive medical bills.

They will now have something substantial on which to build their lives on while the families of those who have passed away benefits from the sweat and toil of their relatives who served the nation with distinction.