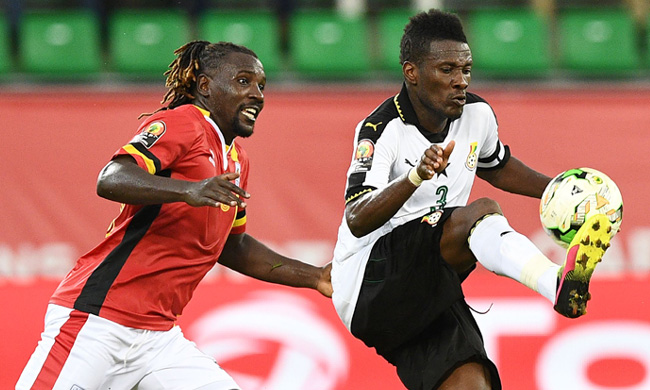 Ghana skipper Asamoah Gyan has explained why he was substituted in the 2017 Afcon Group D opener against Uganda insisting he was not fully fit.

Gyan was replaced in the 70th minute of the game by Agyemang Badu, a decision many frowned upon.

But the Al Ahli striker says he was not match fit hence the decision to come off the game.

“Before the game coach Avram Grant told me that because of the recurring injury I suffered, prior to the AFCON, he wasn’t going to let me play the full 90 minutes.

“It was well understood because I have not been consistent at club level because of the injury, so I was not match fit and I needed to be given some minutes to get to my very best,” he told Happy FM.

The swift attacker created the only goal of the game for the Black Stars after robbing off a defender of the ball and was brought down in the process.

Andre Ayew stepped forward for the spot kick and sent Denis Onyango the wrong way to give Ghana the win.

Gyan, 31 was replaced by Agyeman Badu in 70th minute to the surprise of most Ghanaians because the Black Stars skipper was a threat to the defence of the Cranes.

The Black Stars are currently on top of Group D with Egypt and Mali following in 2nd and 3rd positions while Uganda languish at the bottom following their defeat to Ghana.

Ghana will come up against the Eagles of Mali and a win for the Black Stars could see them through to the quarter finals of the tournament.