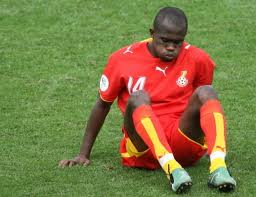 Ghana's in-form striker Matthew Amoah has been ruled out of Sunday's opening 2012 African Cup of Nations qualifier because of injury.

Amoah, who has scored four goal in four matches in the Dutch top flight, suffered a knee knock during a league game at the weekend.

He has not recovered well in time for the game to be played in Mbabane and will not be used by coach Milovan Rajevac.

This leaves the Serbian manager with only Asamoah Gyan, Prince Tagoe and Yaw Antwi as his strikers for the match.

Amoah was top goal scorer during the qualifiers for the 2010 World Cup.

But new Sunderland striker Asamoah Gyan upstaged the Holland-based forward in the goal scoring stakes at the Nations Cup and the World Cup.