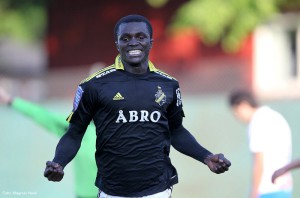 Ghana striker Kwame Karikari has reportedly terminated his contract with Turkish side Balikesirspor.

Sources close to the former AIK Stockholm forward disclosed that the Ghanaian initiated the move for his contract to be terminated.

The Ghanaian striker is believed to have called for the termination of his contract as a result of lack of playing time.

Karikari has endured a difficult spell on his return to the Turkish club where he has failed to score in 14 games.

Kwame had a very successful season with the Swedish side where he scored 12 goals before moving to Turkey.

The former Inter Allies forward scored 12 goals in 26 appearances for the Turkish side.

The source further revealed that all monetary matters between the player and the Turkish outfit have been thrashed out.