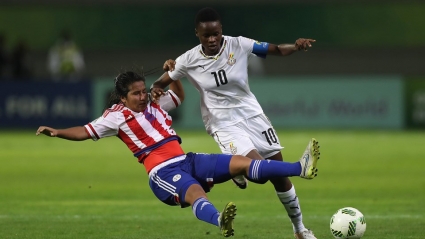 Ghana’s female U 17 star at the 2016 World Cup in Jordan, Sandra Owusu Ansah will not be rushed into the Black Queens according to head coach Yusif Basigi.

The talented footballer was drafted into the U20 female team the Black Princesses at the FIFA World Cup in Papua New Guinea following her stellar performance for the Maidens at the U17 tournament in Jordan.

Many thought her brilliant performance could earn her a straight walk into the senior female national team but her dreams of donning the Black Queens jersey could be shattered as Basigi will not rush her into playing.

“Sandra is an excellent player without doubt but we need to slow down on her. If we don’t take care, we will end up weakening the Black Princess,” he said.

“There will be massive changes in the Black Queens ahead of the AFCON next year as many of the players who played for the Princess at the U20 World Cup are ripe for the Queens.

“We need to have a good transition of promoting some of them to get into the team to prepare for the tournament.

“So if we turn to the U17 and move them to the Queens, the Princesses will struggle,” he concluded.

Sandra's stupendous performance saw her emerging lady of the match on two occasions, each at the U20 and U 217 World Cups.

Yusif Basigi has started his observational tour to strengthen his side ahead of preparing for the 2018 AFCON to be staged in Ghana.