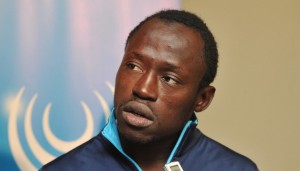 Maritzburg United's new Ghanaian striker Yakubu Mohammed says he is not feeling the pressure of filling Cuthbert Malajilaâ€™s boots after signing a four-year deal with the club.

Last season Malajila netted 12 League goals for the Team of Choice before he was snapped up by Mamelodi Sundowns.

Mohammed, who scored 14 League goals for Ghanaian club Ashanti Gold last season and 16 in the previous campaign, says he is aware of the expectations, but will not allow the pressure to weigh him down.

â€œIâ€™m just coming here to do my job; thereâ€™s always pressure but as a professional you have to find ways to release that pressure,â€ he said.

â€œMy aim is to work hard and to make sure I adapt early but Iâ€™m not here to try and be another player. My job is to play for the team and try to score goals and Iâ€™ll try my best to do that.

â€œIâ€™m a mobile player and I donâ€™t always expect people to cook things for me but in a game situation you rely on the coachâ€™s plans and how the game is flowing; I believe Iâ€™m a total player but weâ€™ll see what the season holds for me and the team.â€

The 24-year-old said he was also not intimidated by last seasonâ€™s Absa Premiership statistics which saw Katlego Mashego clinching the Golden Boot with 13 goals.

â€œI know about last season but that could show that the quality of defenders around here is high,â€ he said.

â€œIâ€™ll try and study all the defenders in the country and with the help of my coach and my teammates I believe weâ€™ll go places.â€