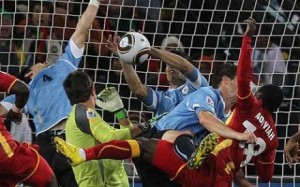 After helping to knock Africaâ€™s great hope Ghana out of the World Cup thanks to his strategically placed hand, Luis Suarez has found another unique way of settling on field troubles by biting his opponent.

The Uruguayan, who showed a serious case of cheating with 'the hand of the Devil', Â in reference to Maradona's 1986 hand-ball heroics, Suarez has sunk to a new low.

He has now joined the shamed Mike Tyson as they fight for the title of whose bite stings the most.

The bizarre incident happened during a clash in Netherland's Eredivisie League between PSV and Ajax.

The match itself was apparently a very boring affair, until extra time when things got a wee bit weird.

A fight broke out after Ajax's Rasmus Lindren was shown a straight red for a harsh challenge on Ibrahim Afellay.

Slap bang in the middle of that scuffle was Suarez, who was blinded by the red mist to the point of losing all control and biting PSV's Otman Bakkal on the shoulder.

Even though the referee was directly behind Bakkal when this happened, Suarez somehow wasn't punished for his Twilight-inspired bite.

Luckily for Suarez, Bakkal decided not to retaliate by doing an impression of ninja-kicking Zlatan Ibrahimovic.

Instead he was a good sport and seemed to laugh the incident off.