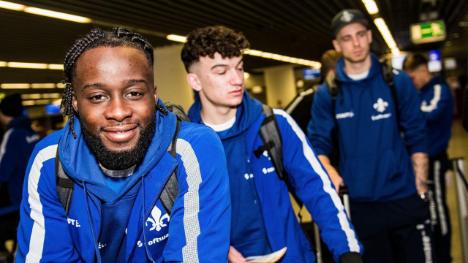 The 25-year-old did not enjoy the best of periods during the first half of the German Bundesliga 2 season.

Berko failed to hit the back of the net in seven league games after joining from Dynamo Dresden in the summer.

Despite his disappointing performance in the first half of the campaign, Berko is hoping to rediscover his scoring boots when the league resumes.

Ahead of SV Darmstadt one week training trip to Andalusia, Spain, the forward revealed his new hair style at the airport and said it took him hours to get it done.

"The braiding took an hour and a half."

His compatriot and teammate Braydon Manu also stated, “They were sewn with a thread."

The Lilies — who will be playing Lausanne and Gaz Metan Medias from Switzerland and Romania respectively — left Germany with 31 players.