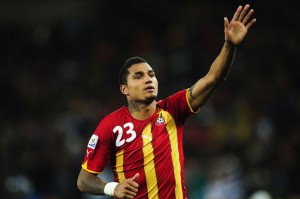 Ghana superstar Kevin-Prince Boateng has launched a fresh attack on his ex-country Germany accusing them of being bottlers on the big stage with the World Cup looming.

The Berlin-born midfielder last month branded his country of birth as a side that lacks the play-maker to win matches for the European side which angered many in Germany.

Now the Ghana international has turned-up the heat ahead of the Black Stars' clash with his country of birth at the World Cup finals later this month.

The Schalke midfielder insists Joachim Low's Germany side must make it to at least the final to be rated as a success in Brazil.

But he said: "I see an outstanding team, but whenever something is at stake they don't make the final step."

Ghana and Germany make up Group G - the group of death - alongside Portugal and the USA.

The two countries meet in Fortaleza on June 21.

Do you think Germany have got what it takes to win the World Cup? Is Boateng's right? Make your views in the box below: