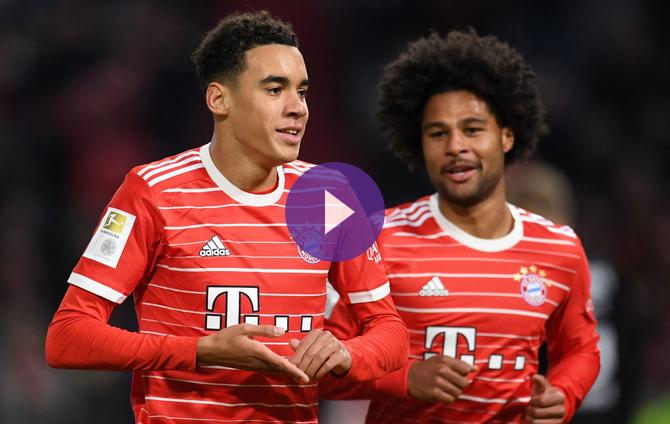 Bayern's win ensured they will finish the midweek round of matches in top spot, although a first-half injury which forced Sadio Mane from the field took the shine off the victory.

The reigning champions are four points above second-placed Freiburg who visit RB Leipzig on Wednesday.

Mane, who will be hoping to play a key role for Senegal at the upcoming Qatar World Cup, went down after just 15 minutes clutching his knee and was replaced by Leroy Sane after receiving treatment on the pitch.

With goals from Jamal Musiala and Leon Goretzka alongside two from Gnabry, Bayern led 4-1 after just 28 minutes, before taking their foot off the pedal against an outclassed Bremen.

In the dying stages, Bayern again turned up the heat, with Gnabry scoring his third on 82 minutes and French teenager Mathys Tel adding another with five minutes remaining.

Wolfsburg -- who are unbeaten in their last eight games dating back to October 1 -- dominated the opening exchanges, taking the lead in the sixth minute when Van de Ven, 21, headed in a corner unmarked at the far post.

Dortmund eventually found their feet towards the end of the first half, with defender Niklas Suele hitting the post just before the break.

Dortmund roared out of the blocks in the second period, with teenage striker Youssoufa Moukoko forcing a reflex save from Wolfsburg goalkeeper Koen Casteels.

Dortmund midfielder Jude Bellingham fell to the turf in the second half clutching his shoulder and required treatment, but was able to continue and finish the game.

With Dortmund pushing forward in injury time, Wolfsburg hit the visitors on the counter, with Nmecha scoring to seal his side's third straight win.

The goal was Nmecha's fourth of the campaign, with the former England youth international taking his final chance to impress Germany coach Hansi Flick ahead of Thursday's squad announcement.

The loss was the visitors' fourth defeat from seven away games this season, while for Wolfsburg it was their first win over Dortmund in their last 15 meetings.

Stuttgart defender Konstantinos Mavropanos scored a header in the eighth minute of injury time to give his team a 2-1 home win over Hertha Berlin.

Stuttgart have won four of their six matches since caretaker boss Michael Wimmer replaced American coach Pellegrino Matarazzo with the side winless and sitting in the relegation spots.

Bochum ran out to an early two-goal lead after just 11 minutes through goals from Christopher Antwi-Adjei and Philipp Hoffmann, before French forward Alassane Plea got one back for Gladbach in the second half.