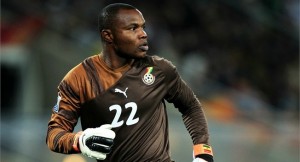 Goalkeeper Richard Kingson will captain Ghana in the absence of John Mensah for Wednesdayâ€™s friendly against South Africa at the Soccer City Stadium.

The 32 year-old who kept the post for the Black Stars at the 2010 World Cup arrived in the teamâ€™s camp on Tuesday as Milovan Rajevac prepares his side for the first game since they went out in the quarter-final stages at the World Cup in South Africa.

Rajevac has replaced Mensah with Under-20 youngster Bright Addae.

The Sunderland defender is the second player to pull out after Dominic Adiyiah.

Kevin-Prince Boateng has also withdrawn from the squad leaving Rajevac with a 17-man squad.