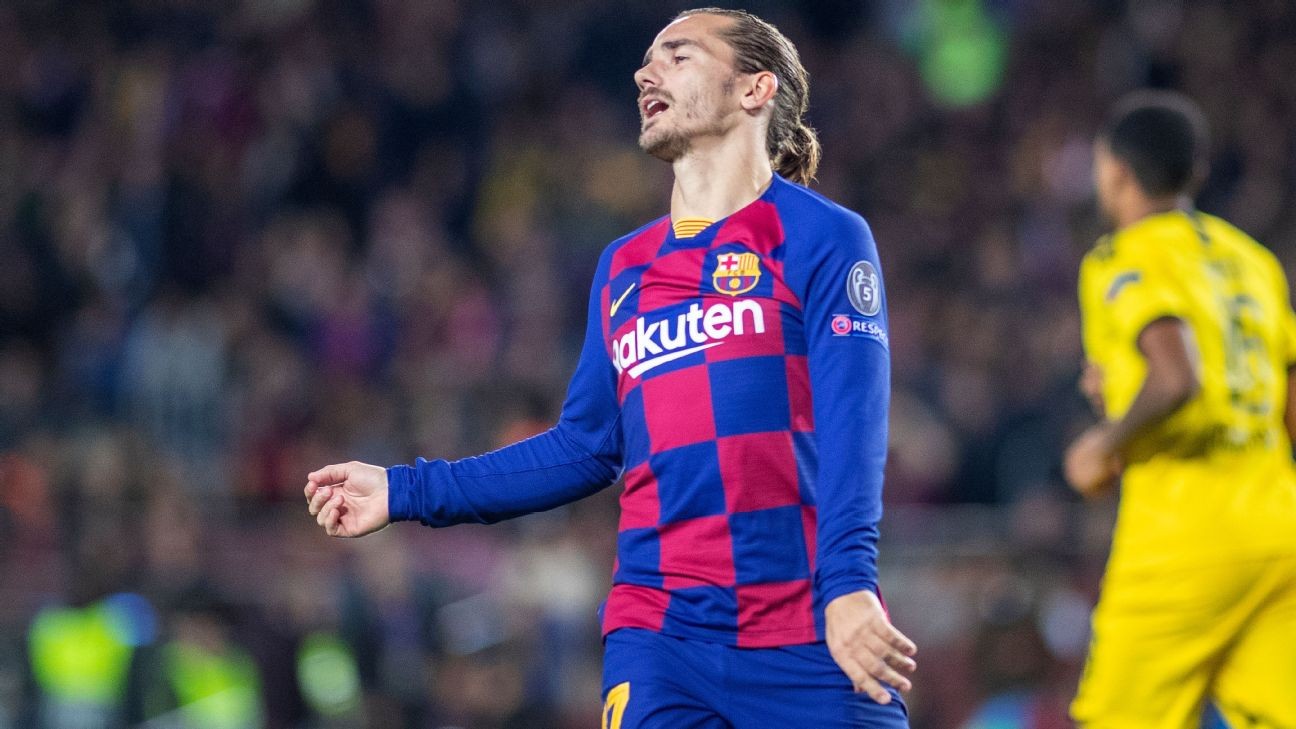 If every Barcelona player had worked as hard and as selflessly as Antoine Griezmann this season, Ernesto Valverde would still be in a job. It's ironic because El Txingurri's fate as Barca boss was 99% sealed when he substituted Griezmann with Barca 2-1 up in the derby match against Espanyol at the start of the month.

Remember what happened from there? This Barcelona side, an eight-stone weakling in big away European contests at Roma and Liverpool, and one that had to cling on for dear life in Prague and Dortmund this season, had become almost as pallid and paper-thin on the road in La Liga.

Think of the limp and rag-doll nature of their defeats at San Mames against Athletic, away to Granada and at Levante. Not to mention long, unimpressive passages of play where the will to compete might have been there but the wherewithal wasn't, like at Osasuna and Atletico. Then, at rock-bottom Espanyol, Barcelona were in the lead and, suddenly, Frenkie de Jong was sent off.

Valverde, incredibly, switched to a 4-3-2 formation, leaving the almost static Luis Suarez and Lionel Messi up front. He rejected the absolutely blindingly obvious idea of taking one of the two 30-something strikers off, reverting to a 4-4-1 and leaving Griezmann to hare around in left midfield, closing down the channels. Espanyol exploited Valverde's choices several times before scoring down that side to claim a 2-2 draw.

The loss of Griezmann, with his utterly ingrained "the team comes first" mentality that had been drilled into him at Atleti like a fundamental rearrangement of brain circuits, stood out.

It's true that Griezmann has been imperfect, his learning process next to Messi and Suarez has been apparent and, as a dad of two young kids, one of whom is 18 months, I know that recuperative sleep has sometimes been at a premium for him. Also he's been operating to new standards but in an underperforming team. But the idea that he, not Suarez or Messi, should be withdrawn against an energized and aggressive Espanyol side, especially one that had just been given a one-man advantage, was a catastrophic error.

Antoine Griezmann has failed to win over fans after joining Barcelona from Atletico Madrid for €120 million.

What's more, Valverde compounded that mistake by not even using his third substitute during that fevered 10-minute spell (plus added time) during which Espanyol equalised and nearly won. If you saw a third-division coach making a mistake like that, you'd have a word, immediately.

Valverde is top quality, as a man and a football thinker, and the mistakes in that derby were simply a testimony to burnout, how worn down by the kilowatt frazzle any coach experiences when he's head honcho at Barcelona, in good times or bad. Josep Maria Bartomeu, the Barcelona president, made a complete hash of sourcing his replacement, thrashing about with unsuccessful attempts to persuade coach after coach before settling on Quique Setien, but you can at least understand his concerns in the aftermath of a Catalan derbi when two points -- which at this rate could be vital in the title race -- were tossed away.

Before that flashpoint, Griezmann's worth to Valverde had been on the rise. He'd scored opening goals in three of the four matches immediately before the Espanyol contest, then put Barcelona ahead in the Supercopa semifinal against Atleti on a night when, ultimately, Valverde's time was up. But what's galling and, to my mind, inexplicable is that many (fans, media and ex-players) seem to be underwhelmed by, and disparaging of, Griezmann.

After Setien took charge of his first game last weekend, a 1-0 win at home to Granada, there were plaudits for many other players while Griezmann was accused of being invisible or unimportant throughout the 90 minutes. It's absolute, utter nonsense: in fact, Griezmann was fundamental to the fact that while they struggled to find good, fruitful scoring positions before eventually going up 1-0, despite absolute domination of possession, Barcelona stayed competitive and fluid. All this even though he's a striker, even though Suarez was absent, he made numerous runs to press, to cover and to recuperate the ball.

Three particular moments against Granada stood out. In the 15th minute, Barcelona's high press was easily superseded so that Arturo Vidal, Sergio Busquets and Sergi Roberto were all caught high upfield. Griezmann spotted the danger as Darwin Machis broke away completely on his own and looked to feed Carlos Fernandez. It was a huge opportunity for a side that had already beaten Barcelona once this season, and only €100m striker Griezmann was willing, or able, to react, racing some 70 metres, at least, and diving in to snare the ball off Fernandez's boot as soon as Machis passed to the striker.

Just after half-time, Griezmann sprinted back into midfield to handily intercept Yan Brice Eteki's pass to Victor Diaz. And in the 68th minute, Griezmann sprinted from the Granada penalty box to the halfway line, after Busquets had given the ball away, to tackle Antonio Puertas and prevent a 4-on-3 situation. Exemplary.

I know that last week's intense training under Setien, especially Tuesday's double session, had left all of Barcelona's senior, most-used players pretty tired. The training ground atmosphere, for the moment at least, has changed. Previously, that atmosphere, and the daily intensity around the club, was the product of an unofficial consensus between senior players and Valverde. Now it's Setien's way. No other options.

Against Granada, Barcelona played with a different emphasis on passing, position and possession. But of their 1000+ passes, only about 200 went forward, an indication that players were often static and waiting for a pass, which in turn makes it easier for opponents to defend. With fitness, stamina and sharpness, that should change.

Of Barcelona's six shots on target, Griezmann produced two and set Ansu Fati up for a third. In the best Barcelona move other than their winning goal, it was Griezmann who drops deep, shows for Busquets and flicks a perfect pass to take out two Granada midfielders and set up Vidal to serve Messi. Then he turns and sprints a third of the pitch to draw markers away from Messi so that Ansu's cutback for Messi leaves the iconic No. 10 clear to shoot narrowly wide.

Antoine Griezmann must hope his early-season frustrations will come to an end under Quique Setien.

Then came the breakthrough. When Ricard Puig robs Puertas and passes to Busquets, it's Griezmann's run and intuitive flick that serves Vidal for his neat backheel into Messi's path to score. Look back at the Frenchman's speed and vision. It's pretty top-rate. Despite all this, there appears to be an overbearing expectation that Griezmann should be carrying the failing season on his back with oodles more goals and that he's required to look like a superstar at all times.

A few weeks ago, Griezmann told me he was committed to the hard slog, utterly determined to learn and succeed. That it took him six months to even begin to learn the Atleti system when he moved there, and a full season before he felt "at home," ready to be a team leader, was also telling.

Right now, the report card on Griezmann should include "working his socks off," "helping a failing team not fail," "ready to kick on," "needing Messi to instinctively trust him and pass to him," and "defending better than some defenders." He probably won't grumble, and he might face the prospect of Neymar returning next summer -- we can expect another saga there -- but I think Griezmann is made of the right stuff. If everyone in that squad worked as hard as he does and cared as much, Setien would be set fair for a fine first season.

Griezmann's two goals in the 2-1 victory at UD Ibiza on Wednesday, including a 94th-minute winner that rescued Barca from an embarrassing Copa del Rey exit in the cold of January, were only further evidence that his importance to the team is far higher than some of the slow-to-catch-on media and fans understood.

Once he adds to his seven La Liga goals and Setien succeeds with his midseason purge of Barcelona's sluggishness, perception of this diligent French forward will change, and change quickly.