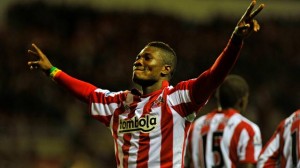 His Sunderland career might have got off to a surprisingly slow start, but club-record signing Asamoah Gyan feels he is finally firing on all cylinders.

Gyan failed to start any of the opening ten games of the season as he struggled to regain match fitness following a Â£13m switch from French club Rennes.

But with fellow striker Darren Bent nursing a hamstring injury, the Ghanaian quickly made up for lost time by scoring four goals in the space of three matches against Stoke, Tottenham and Chelsea.

While Bent is expected to be available for Mondayâ€™s home game with Everton after coming through his first full training session unscathed yesterday, it is hard to imagine Black Cats boss Steve Bruce dropping Gyan in five days time.

And with his confidence having been knocked by his lengthy spell on the substitutesâ€™ bench, the 24-year-old admits it is nice to feel he is finally back to the top of his game.

â€œI feel like Iâ€™m really firing now,â€ said Gyan, who was one of 23 players shortlisted for FIFAâ€™s World Player of the Year award last month.

â€œIâ€™ve worked very hard to get to this stage. Since our main man Darren got injured, I have had a really good opportunity to come into the side and show what I can do.

â€œThankfully, Iâ€™ve been able to utilise my chance. Itâ€™s good for me, but itâ€™s also good for the team. I think everybody has been happy with my performances.

I feel like my fitness level is good and I also feel that Iâ€™ve totally regained my confidence now. Iâ€™m not saying I lost it before, but itâ€™s never nice when youâ€™re not in the team. I just hope this continues.â€

Prior to this monthâ€™s 2-0 win over Stoke, Bent had scored six of Sunderlandâ€™s nine Premier League goals, with two of the others coming courtesy of own goals from Stephen Carr and Richard Dunne.

Fears were inevitably raised when the England international suffered a hamstring injury in the wake of the derby defeat at St Jamesâ€™ Park, but Gyan has filled the gap manfully.

Indeed, while Bent was recuperating on Wearside at the weekend, Gyan was making a telling contribution to Sunderlandâ€™s best result of the season â€œThere was definitely a pressure when I came in because Darren has been the main man and heâ€™d been scoring just about all of the goals for the team,â€ said the striker, who was in Dubai last night representing his country in a friendly against Saudi Arabia â€œDarren has done a lot for the club and someone had to step in and replace that. The opportunity came to me, and I knew I had to prove myself.

Hopefully, I have done that with my performances and my goals.â€

Sundayâ€™s 3-0 win at Chelsea lifted the Black Cats to sixth, and fuelled ambitions of a sustained assault on the European places this season.

Sunderlandâ€™s players are keen to keep their feet on the ground, but Gyan admits that after winning at Stamford Bridge, they should be afraid of nothing.

â€œAs players, we all believe in ourselves and we know what we are capable of achieving,â€

â€œIf we carry on believing in ourselves, I think we will do great this season because you just have to look at the game at Chelsea to see what we can do.

â€œPeople might look at Sunderland from the outside and think it is a small club or something like that, but ever since Iâ€™ve come here, Iâ€™ve been able to see the quality we have.â€