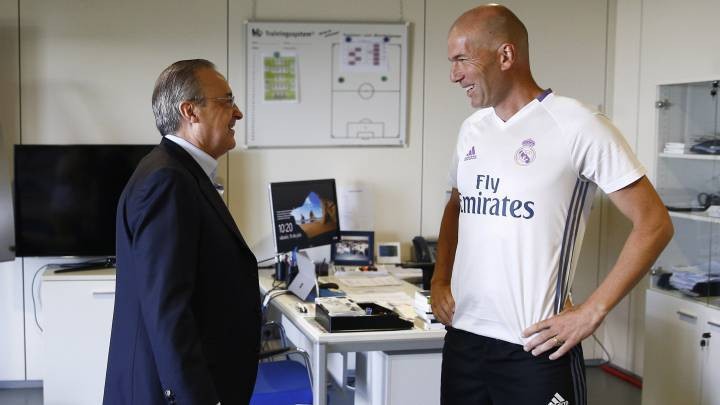 Forgetting what might happen this season, Zidane will remain in charge at Real Madrid and he has a number of decisions to make.

Zinedine Zidane will remain the manager of Real Madrid next season regardless of how the season ends as this publication reported recently.

Up until the coronavirus struck, Real Madrid were crowned Spanish Super Cup champions in Saudi Arabia at the start of the year, but they fell to Real Sociedad in the Copa del Rey at the Bernabéu and had one foot out of the Champions League after defeat to Manchester City in their first leg last 16 tie.

LaLiga was going down to wire though with his side in the fight. Now though, all of this matters little. What is important, however, is how Zidane re-builds and prepares for next season.

There are many uncertainties for Zidane as the head of the operation and several decisions to make. They are as follows:

Haaland or hold up front

That Madrid lack goals is one certainty for Zidane. The historic double-winning season in Madrid saw them score almost three goals per game and during this season they haven't managed an average of 2.

It is within this context that Erling Haaland's name has emerged, the 19-year-old Norweigan wonderkid. Zidane has to decide if he wants to make a push for the striker or hold with what he had: Jovic, Mariano and company. Marco Asensio's return could inspire an increase in those goal number along with the return of a fit and functioning Hazard. It's a risk though.

Haaland doesn't have a release clause until the winter of 2020-21 when it kicks in and will costs €75 million. Dortmund might have tried to sell him this summer for more than that because given his rise to stardom, that fee might look small in years to come.

It's a question of authority in the dressing room with Bale and James. Last summer, Zidane gave the order to let both players leave but when they rejected the idea, it became impossible.

The problem in both of their cases is their wages. Bale is, along with Ramos, the highest paid player in the squad at €14.5 million a year. James earns close to €10 million. No team is willing to match their wages while satisfying Madrid's valuation of the players.

It will be Zidane who forces the issue with both players in order to keep control of his dressing room and a squad filled with players he wants. Real Madrid might lose out financially with their exits though.

To Pogba or not to Pogba

There are players who will return and contribute in midfield such as Martin Odegaard and Dani Ceballos. Zidane wants energy and muscle in the middle to drive his team up and down the field. There is only one player who fits the profile of what he needs. That's his compatriot Paul Pogba.

His contract at Manchester United ends in 2021 and they want to renew him but his dream of joining Real Madrid remains alive. The economic crisis and the fact that he has only played eight games this season has seen his price drop below €100 million. The problem? Whether or not Madrid can afford the cost as it might compromise their plans to lure Kylian Mbappé to the Bernabéu.

Real Madrid have a wealth of options at full-back on either side. Marcelo wants to complete his contract and Ferland Mendy has just arrived. Carvajal is a sure-fire starter but you also have Alvaro Odriozola, Achraf Hakimi and Sergio Reguilón.

The logical thing is that Zidane will let Odriozola leave but aside from that, he will have to decide between Reguilón and Achraf. They are both have marvellous seasons at Sevilla and Dortmund respectively but the crisis will force one of them to be sold. Zidane has to take a gamble. Achraf can play on either side but Madrid will have to sit down and work out a return from Germany.

Ramos, Varane, Militao and Nacho… These are the four central defenders available at present. Of them, there is the chance that Nacho asks to leave in search of more minutes and Militao has offered some unspectacular performances. The academy doesn't offer too many solutions to this problem either.

It's possible that Zidane asks to bring in someone at the position to cover for his two starters. Vallejo is getting experience elsewhere but after his moves to England, Germany and now Granada, whenever he returns to Madrid with a chance, he is left sidelined with injury.

Real Madrid paid €11 million for Andriy Lunin two summers ago. He is still young and was bought as a long-term solution. The first year, he was loaned to Leganés and didn't play. He was loaned to Valladolid at the start of this season and that didn't work out either. He is at Real Oviedo now and is playing after a spell on the bench that could have derailed his development. He is a starter with Ukraine but Zidane has a big decision on his hands.

Does he bring back Lunin ot stick with his compatriot, Alphonso Areola. The French keeper is 27 and has much more experience having been the starter for PSG.