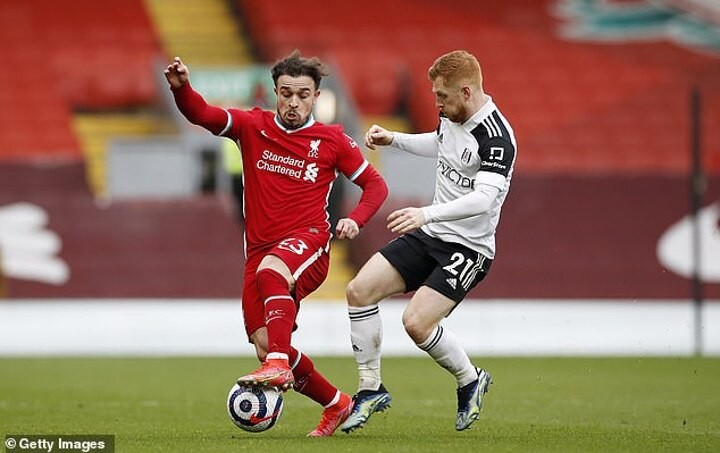 Fulham midfielder Harrison Reed insists his side 'wanted it more' after they inflicted a sixth straight home defeat on Liverpool, heaping further pressure on the reigning champions.

Mario Lemina scored the only goal of the game just before half time to seal a precious away win for the Cottagers, in their battle against relegation.

Scott Parker's side are now level on points with 17th-placed Brighton, and Reed insists his side showed greater desire to win the game than their faltering hosts.

'It’s massive. We came here with confidence and we knew had a tough run, we knew if we could get something out of these games we would be standing in good stead so we are delighted with today,' Reed told Sky Sports.

'The manager spoke about coming here and winning and I think the first half was maybe one of our best this season and the second half we had to dig in, put our bodies on the line and we did that.

'We wanted it more. That was evident on the pitch from the first whistle and it was a big factor in us getting the three points.

'We feel it has been coming, maybe we haven’t been scoring enough goals. We brought in Maja and he has brought in a brilliant striking instinct and he worked his socks off and was really good as well.

'We feel that, we’ve been building from the start of the season to now we have grown massively, everyone can see that as well.'

Fulham have lost just one of their last seven league matches and seem to be finding form at just the right time. Next up for the Cottagers is a home game against runaway Premier League leaders Manchester City on Saturday.

They travel to Budapest for the second leg of their last-16 Champions League tie against RB Leipzig this Wednesday, the Reds are 2-0 up on aggregate.

They then face a crucial league game at Wolves on Monday.