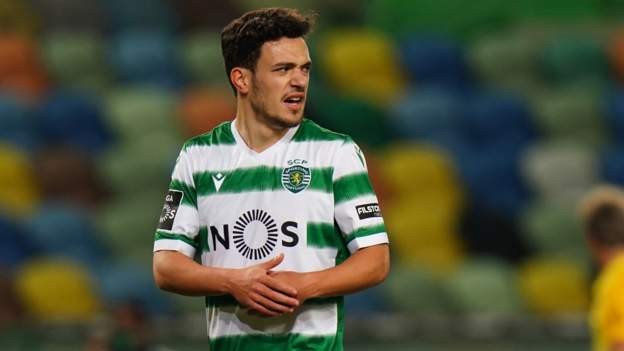 Pedro Goncalves has scored 14 Portuguese league goals this season, five more than anybody else

The frankness displayed by then-Sporting Lisbon manager Jorge Silas hardly shocked anyone in the press conference. "How do we replace Bruno Fernandes? We would need three players for that," he replied. "There's no-one else like him in Portugal."

It felt like an impossible job to fill the gap left by Fernandes when he joined Manchester United in January 2020 for an initial £47m. Much sooner than expected, however, the Lisbon club seem to have struck gold again with the summer signing of Pedro Goncalves, a 22-year-old attacking midfielder who had an unsuccessful spell at Wolves but already looks a steal at £5.6m.

Since joining from Famalicao, the boy tasked with the responsibility of filling the void left by Fernandes' departure to Old Trafford has hit the ground running.

While he may not be as influential as Fernandes in his all-round play, he's actually proving to be even more prolific in terms of goals and assists.

In the first half of the current season 'Pote', as he's also known, contributed 14 goals and two assists in 15 league appearances, a slightly better record than his predecessor, who had eight goals and seven assists in 16 matches at the halfway stage of the 2019-20 campaign.

Unlike Fernandes, though, all of Goncalves' goals have come from open play.

His form has been a key part in transforming a consistently underperforming team into title challengers. Sporting are yet to lose a game in the Portuguese league, sitting 10 points clear at the top. The last time they lifted the trophy was in 2001-02.

The pressure of ending such a long run without success has broken players in the past, but that doesn't appear to be an issue for Goncalves.

A lethal finisher and now being linked with Liverpool and Manchester United, he is been doing things that not even his former Famalicao coach Joao Pedro Sousa thought he was capable of.

"When we brought him from Wolverhampton [in mid-2019] he was a player with almost no playing time," says Sousa, who previously worked as assistant at Everton, Watford and Hull City.

"He obviously wasn't the footballer he is now, but he clearly understood the game and its different moments - something that makes a difference in high-level football. He had the chance to feature with me in a number of positions in midfield - as a double pivot, a winger and a number 10.

"This season, we are seeing him in a more advanced role, closer to the finishing area, with more goal involvements.

"He's revealing an ability to get to the last third and attack that I didn't know about, so I have to congratulate Ruben Amorim [Sporting boss] for that. It's any coach's dream to have a player as versatile as Pedro."

Despite having only one full season under his belt, Goncalves - who has a 60m euros release clause - doesn't seem to care much about the hype surrounding him.

He still approaches games the same way he did when he was a kid in Vidago, a village of 1,000 people in northern Portugal, where he spent his days kicking balls at ambulances in the fire station where his stepfather, Joao, works.

"I usually describe him as a street player because whoever he plays against - it doesn't matter if it's a Pizzi [Portugal defender and Benfica captain] or a third-tier footballer - it's exactly the same for him," says Fabio Martins, his former team-mate at Famalicao and now at Al-Shabab in Saudi Arabia. "He doesn't feel the pressure of the big games."

Perhaps the reason Goncalves looks so at ease in a football stadium is because he literally grew up inside one.

His mother, Maria, was a kit woman at Vidago, the team that represents the town where he was born, so for most of his childhood he lived in a three-room house located in the stadium.

He would often invite his friends for a kickabout, only coming home when his parents turned the lights off.

At the age of nine, he was already playing for Chaves, club that flits between the first and second divisions in Portuguese football. He was then taken for a trial at Braga, an established top-flight club, and impressed so much they immediately signed him.

"I remember looking at him and thinking 'this boy is not a player - why should I put him in?' He was short, a bit chubby and appeared to have come straight from bed," recalls Jaime Leite, one of his early mentors.

"It was our last training of the week. I had some things in mind that I wanted to do, but in the end, I decided to give him a chance. He told me he played anywhere in the attack, so there he went.

In five minutes, he scored two goals, one of them lobbing the ball over our goalkeeper. We couldn't believe our eyes. He was a phenomenon. We ended up working together for four years and building a father-son relationship.

"He's a fantastic kid who came from nowhere, didn't have a wealthy family, fought his way up on his own, so he deserves all the spotlight he's getting."

Goncalves made one senior appearance for Wolves in two years at the club, a League Cup match with Sheffield Wednesday

Goncalves chose to leave Braga before making his senior debut and, like Fernandes - who began his career in Italy - started his professional days abroad.

The Portugal U21 playmaker moved to Valencia, but could not play for an entire year there because Fifa did not accept his registration. He stayed in Spain for two seasons then packed his bags again, this time for the Midlands and to Wolves, where he was reunited with Nuno Espirito Santo, who had managed Valencia.

He shared a house with fellow Portuguese Ruben Neves but on the pitch things didn't go well as he made only one appearance for the first team - as a substitute in a 2-0 Carabao Cup win at Sheffield Wednesday in August 2018.

Wolves used some of the fee they received for him to fit a new artificial pitch at their academy,external-link while they stand to gain more if he moves again - it is thought they would get a percentage of any sell-on Famalicao would receive.

He is now finally getting a chance to prove himself on a big stage and nothing seems to be holding him back - not even his temper.

"He's a bit annoying, in a good way," says Martins. "But sometimes in a bad way also, moaning a lot, speaking non-stop, always arguing with opponents.

"Perhaps this is how he manages to keep his focus on the game. I know a lot of footballers who are like this - these things are perfectly normal."

Sousa agrees that Goncalves has an edge to his personality - displaying traits that can sometimes be seen in the man he replaced at Sporting.

"He hates to lose - not only in the game, but before the game, after the game, during the week, everywhere," says Sousa.

"He's a fiercely competitive character, but he's learning to control himself in a more mature manner if things are not going his way on the pitch. This was an aspect we understood he had to improve when we signed him - and he did."

As it turned out, there was actually someone very similar to Fernandes - in football ability and character - in Portugal. Sporting appear to pulled off the impossible job.

From O.J. Simpson to the LA riots: How the helicopter changed the newsZapped: Office drone Brian is transported to a strange new world...