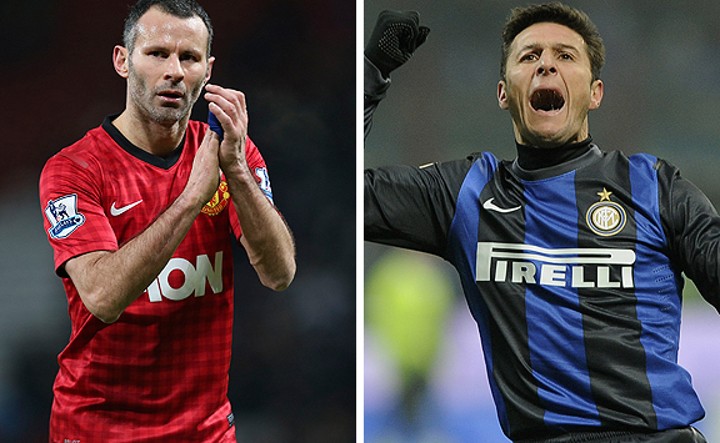 Ryan Giggs has proclaimed Inter stalwart Javier Zanetti as the toughest opponent he has ever faced across his footballing career, with the Manchester United legend citing the defender breaking his nose in the pair's 1999 Champions League quarter-final encounter as a key reason behind his choice.

Wales boss Giggs and now-Nerazzurri vice-president Zanetti only faced each other four times across their career - a decade apart in a pair of European two-legged knockout encounters - but the latter left a lasting impression on the former Red Devils favourite when they first met during United's treble-winning campaign, with the pair's intense tussle living long in the memory.

Speaking to MUTV, Giggs revealed that he considered the Argentina star his stoutest foe across his two decade-plus tenure at the top of the footballing world, stating: “The hardest player I played against was [Javier] Zanetti from Inter."

“He ran all day and he used to be a midfielder so he was comfortable on the ball, he could defend, he was tough and he actually broke my nose in the quarter-finals against them. He had everything as a defender.”

The pair previously discussed their admiration for each other six years ago when they both retired in 2014, with Zanetti recalling in an online Q&A session: “I remember our own personal duel. You are one of the toughest opponents I have ever played against!”

Elsewhere in conversation with MUTV, Giggs also weighed in on who he believed to be the best players he ever called his teammates, with the midfielder opting for two unsurprising picks in Cristiano Ronaldo and Paul Scholes.

“The best player is Cristiano,“ he added. ”Obviously he was only with us for a short space of time, when he was brilliant, and then went on to do just as well as he did at United elsewhere.

“But Scholesy is the best player I played with at United. You’ve all seen him. In training, he was ridiculous, you couldn’t get near him. His brain was quicker than everyone else, his range of passing and he was nasty.

“If someone had taken the mickey out of him it was logged in the brain. Whether it be that training session or a week later or even six months later, he’d get you back. You’d think you’d got him in training and then he’d just pop the ball off and give the little feign, he was just brilliant in training.”

Giggs led Wales to their second successive European Championship competition in a row last November, though he will not get to lead out his nation until next year following the tournament's delay.

He will hope to emulate Chris Coleman's remarkable, Gareth Bale-powered run to the semi-finals previously achieved in 2016 when they defeated Northern Ireland and Belgium on their way to an exit at the hands of eventual champions Portugal.