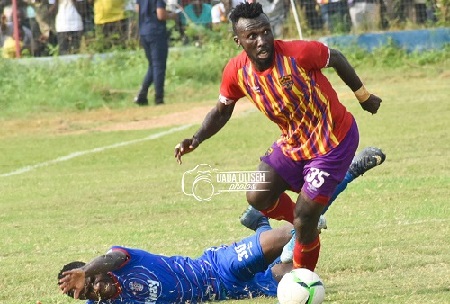 Hearts of Oak midfielder Emmanuel Nettey is still responding to treatment on the knee injury he picked up against Inter Allies.

The 24-year old has been out of action for four weeks which may continue for a longer spell.

Nettey picked up the knee injury against Inter Allies on matchday three at the Accra Sports Stadium as the Phobians lost the game by a lone goal.

He has not featured for Hearts of Oak's in the games played in December as a result of the injury.

He is also yet to play under Serbian coach Kosta Papic since he took charge of the club.

According to information from the club, Emmanuel Nettey is receiving medical attention on the knee injury he sustained in the game against inter allies. He is expected to meet the doctors again this week.

He is expected to be on the sidelines for quite some time before making a return.

Hearts of Oak currently is placed fifth on the league log with 11 points after matchday seven.