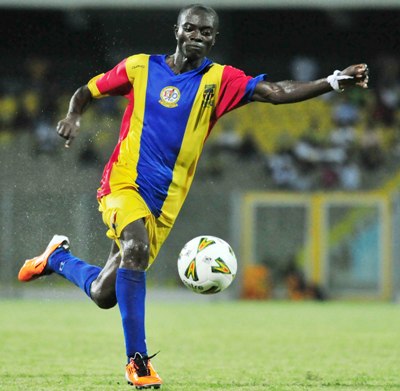 Hearts of Oak fans have questioned the loyalty of Uriah Asante after the midfielder's well-wishing facebook message to Kotoko coach Maxwell Konadu.

He responded to Konadu's comment which read: "No retreat no surrender at Berekum on Wednesday" by posting: "I pray you win."

This has incurred the wrath of the jealous Phobian fans who have warned him not to turn up for training or he will be beaten up.

The Hearts fans say the playerâ€™s continuous stay with Hearts is only inviting physical harm.

"How can a Hearts player wine and dine with the enemy?" Osman Awal-Kasim, a chairman of one of Hearts supporters' wing ChapterÂ  'O', told Kumasi-based Angel FM.

"We (supporters) are telling him not to step onto the training grounds again because he has shown clearly his heart is not with us.

"We will inform management accordingly because this shameful act will not be tolerated."

Asante was a member of the 2011 All Africa Games Ghana Under-23 side where Konadu was assistant coach.