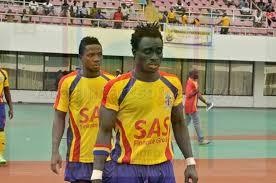 Playing in the Ghana Premier League is full of struggles says ex-Hearts of Oak defender Kwaku Andoh who is eyeing a move outside the country.

The Ghanaian top-flight has come under severe criticism regarding the quality of football exhibited by the clubs, the quality of pitches and the wages structures of certain clubs.

It could be recalled that, last month players of the one of the biggest clubs in Ghana, Hearts of Oak boycotted training for non-payment of salaries.

Kwaku Andoh who last week terminated his contract with Hearts of Oak has stated that playing in the Ghana Premier League is full of struggles.

“Playing in the Ghana league is full of struggles. I have played for clubs like Berekum Chelsea, Heart of Lions and Hearts of Oak and this is the time for me to move on,” Andoh told Asempa FM.

“Though I earned something good when I joined Hearts of Oak, I had to terminate my contract with them due to lack of playing time. I’m done with the Ghana league because of the bad conditions. My aim now is to get a club outside Ghana,” the 25 year old defender added.

Andoh played for two seasons for the Phobians before drawing the curtain on his career with the Rainbow family.