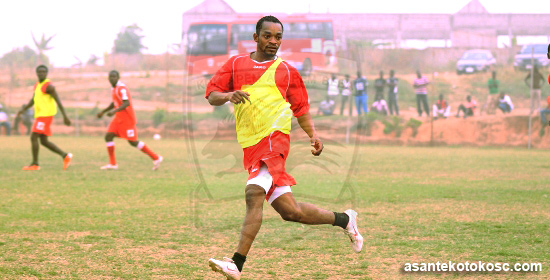 The 27-year-old finally got his wish to join the club he had supported as a boy in January when he wasÂ transferredÂ from Liberty Professionals.

His maiden appearance for the Porcupine Warriors in the Premier League was however delayed due to uncompleted work on his transfer documentation.

The ex national U-23 captain who to his joy was cleared by the Player Status Committee after its sitting on Friday following a favourable testimony by his former side Liberty and is now available to feature for Kotoko says he can't wait to get started at his new club.

"I was very happy andÂ relievedÂ to hear I had been given the all clear to play for Kotoko," the midfielder told GHANAsoccernet.com.

"I had supported this club all my life and was always hoping for the day I get to don their jersey and thankfully it has happened so I just want to cherish and enjoy this moment."

Helegbe also added his immediate aim is not to use Kotoko's prestige platform to angle for a return to Europe but rather to help the Kumasi-based club secure it's first league title in four years.

"Kotoko is a great club and they are currently with a good chance of winning the league.

"I am coming in with all I have to help make sure we (Kotoko) end up victorious this season because it has been a long time and the fans really need something of this nature to restore love and confidence in the club."