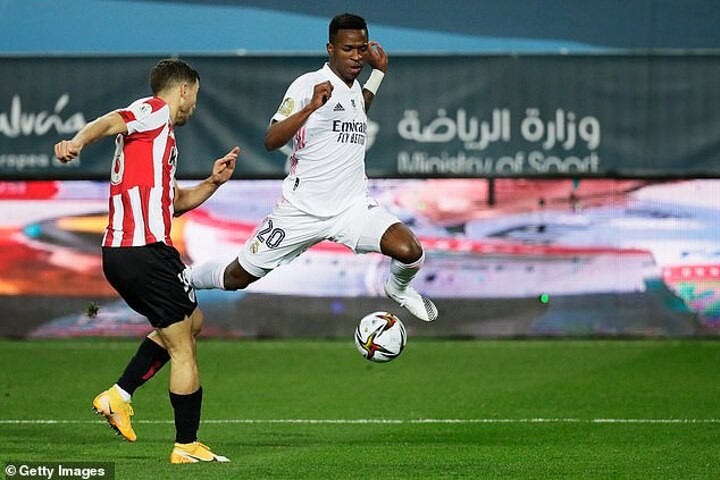 For a coach renowned for the tight relationship he has with his players, Zinedine Zidane has a lengthy list of players he has given the cold shoulder to.

Gareth Bale, James Rodriguez, Sergio Reguilon and Dani Ceballos are all in there and the team of Zidane cast-offs now has a new winger in Vinicius Junior.

The fall-outs are never explosive. Bale maintains there was never a single row with the Real Madrid coach.

Even when he opted not to travel to Manchester for last season’s Champions League quarter-final second leg because he knew he would not play a single minute, the conversation between the two was brief and not at all explosive.

But what the Zidane battles lack in intensity they make up for in duration. Those close to the him say once you have a cross next to your name then it’s very hard to get back in favour for as long as he is in charge.

That’s bad news for Vinicius, who already had a shaky relationship with the manager even before, as Diario AS reported this week, things took a turn for the worse in Manchester last year when he was dropped and then read his mobile through the team talk before not even warming up during Real Madrid's Champions League exit.

For all of Zidane’s incredible achievements, he still has doubters questioning his ability to improve young players.

When Vinicius turned up at Madrid in 2018 aged 18 and with Ronaldo Nazario sat alongside him in his presentation he was very much the teenage Cristiano Ronaldo – a physical phenomenon, full of tricks and bursting with potential. But he was going to need moulding into a player who could turn the brilliance into goals and assists and it’s still a work on progress.

The club have always seemed keener than Zidane to take the now 20-year-old to the next level at all costs. They want a return on the £40m (€45m) they spent on him when he was still a 16-year-old at Flamengo, where they left him on loan until he turned 18.

That much has been clear by the reluctance to loan him out. Ronaldo Nazario was at his presentation that day in part as a Madrid ambassador and in part as Vinicius’ guardian and guarantor.

When Ronaldo went on to buy Valladolid just over a year later, it seemed logical that he might take him to the first division side where he could establish himself before returning to the capital - but Madrid were never interested in sending him anywhere.

Vinicius’ frustration the day he was left out of Real Madrid’s game with City was understandable. But his reaction will have done nothing for his chances of becoming one of Zidane’s chosen ones.

The suggestion in AS that Vinicius’ mobile phone indiscretion has cooked his Madrid goose for good doesn’t completely compute because in Madrid’s biggest game of this season in the league – their away game at the Nou Camp – Vinicius was picked to start and played 90 minutes in the 3-1 win.

But that was in October. A month later - when Champions League survival was on the line in the two games against Inter Milan and Eden Hazard was fit again - the Belgian was back in the team and the Brazilian was back on the bench.

Before that he played in the disastrous 2-2 draw away to Borussia Monchengladbach that put Champions League qualification in doubt and it was at half time in that game that Karim Benzema was picked up by microphones telling team-mate Ferland Mendy: 'Don’t pass to him it’s like he’s playing for the other side.'

The conversation took place in front of Vinicius, who was oblivious to the criticism because they were speaking in French.

Most agreed Benzema had crossed a line, humiliating a young team-mate but there was no real apology from the forward. No one is closer to Zidane than Benzema and it felt like another rebuff for ‘Vini’ that he was more or less told to get on with it and not expect a sorry from anyone.

Vinicius did get on with it. He handled the situation well and continues to appear to the outside world as a model young professional doing his best to accentuate the positives in his game, to eradicate the negatives and improve as a player.

But behind the gates of Valdebebas – the club’s vast and slightly soulless training ground on the outskirts of the city where they play their home games while the Santiago Bernabeu is renovated – he continues to struggle.

He has not played 90 minutes in the league since the start of December. He has played just 24 minutes in the last four league games and was introduced as a sub in the Spanish Super Cup semi-final defeat by Athletic Bilbao with his team already two goals down.