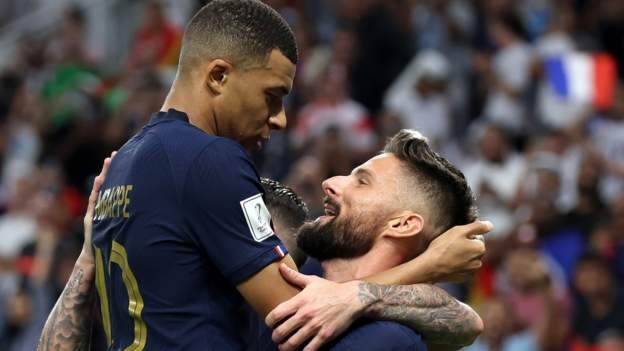 France have seen some incredible players in their history but it's the unassuming Olivier Giroud that can now lay claim to being among the country's greats.

The AC Milan striker became France's leading men's scorer when he put his side ahead in their 3-1 victory over Poland in the last 16 of the World Cup.

But on his momentous day - when he scored his 52nd international goal - the former Chelsea and Arsenal striker was upstaged by team-mate Kylian Mbappe's stunning showing.

Didier Deschamps' men mean business as they aim to defend their crown and their charge is being led by veteran 36-year-old striker Giroud and 23-year-old sensation Mbappe.

"This is the competition of my dreams," said man of the match Mbappe, who scored twice and set up Giroud's goal. "It is something I have been preparing for physically and mentally.

"We are doing well but [we are] a long way from the objective of winning the final."

Just as Argentina's Lionel Messi brings fans out of their seats in excitement, Mbappe does the same for France and he was at his devastating best against Poland.

Mbappe drew loud cheers when he put Aston Villa full-back Matty Cash on his backside with a quick turn but the resulting shot deflected into the side-netting.

Having provided the assist for Giroud's opener, Mbappe showcased his fantastic finishing by smacking his first into the roof of the net before curling a glorious second into the far corner.

He is now the competition's top scorer with five and added to the four he netted in France's triumphant 2018 World Cup campaign, he has already overtaken Argentina's Diego Maradona, who scored eight, while Portugal's Cristiano Ronaldo has also reached that tally.

At 23 years of age, Mbappe is the youngest player to score nine World Cup goals, breaking the record held by Eusebio, who scored eight for Portugal by the age of 24 years and 182 days.

"We know about KB," said Deschamps. "We have already seen him and he speaks on the football pitch.

"He knows he can change a match in moment. He plays with such joy and smiles. France needed a great Kylian Mbappe tonight and they got one."

Former Premier League striker Dion Dublin said on BBC One: "He is playing the game as though he is in the park. He is an incredible footballer."

Chris Sutton, speaking on BBC Radio 5 Live, said: "Eventually it came down to Kylian Mbappe and a couple of wonderful finishes from him.

"This was a strong performance from France. There are tougher tests to come but it was a display of French swagger and a statement that we are still the team to beat."

Some may have felt Giroud's best years were behind him when he left Arsenal last summer to move to Italy but he scored 11 goals to help Milan win the Serie A title.

Giroud has a star-studded cast operating around him with the likes of Mbappe and the classy Antoine Griezmann pulling the strings.

But Giroud is a Deschamps favourite and knows what he brings to the team with his unselfishness and physicality up front, while he has been given more minutes this time because of the pre-tournament injury to Karim Benzema.

At the last World Cup, Giroud played all the games in their triumph in Russia, but in 546 minutes of action, he not only failed to score a goal but did not have a single shot on target.

How things can change. Giroud has scored three times already in this competition, but will be aware that his overall record may not last too long given Mbappe has already scored 33 goals for France.

"Giroud has always been an important player," said Deschamps. "Four years ago he didn't score but we are seeing his quality.

"He has managed to remain mentally strong. He has broken the record by Henry, and Mbappe might beat it one day. To score so many goals at international level is a great achievement."

Former England defender Rio Ferdinand said on BBC One: "You have to have the right attitude to do what Olivier Giroud does, with people saying at times he wasn't good enough.

"He is not flashy like a Kylian Mbappe with skills or pace but he knows what he's good at and he executes it well."