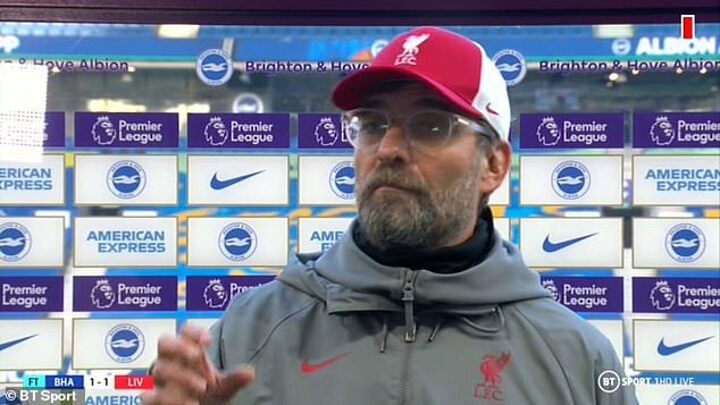 The final whistle had barely sounded at the Amex when Jurgen Klopp dugout his violin and began the latest rendition of his saddest song.

You know how it goes by now: TV bosses, turnarounds, treatment tables. Repeat.

You can only imagine, from isolated households around the country, the tears of pity flowing towards the corridors of power where, as the authorities battle to control one crisis, another arrives at their door.

Surely the Liverpool boss can forgive the sarcasm.

After all, his trip to the south coast ended with a slow clap for the officials (who gave Brighton a late penalty) and a congratulatory message for BT Sport (who apparently caused the hamstring injury to James Milner). Sheffield United boss Chris Wilder was treated to similar.

Klopp’s frustrations are not without merit, of course. His injury list is lengthy, Liverpool’s schedule is especially punishing.

The reintroduction of five subs would, as Klopp says, be ‘a little help’ — particularly as we enter the festive period.

But sympathy will always be in short supply while everyone suffers.

Especially while Klopp’s squad remains flush with brilliance and while Liverpool are sitting pretty near the top of the table. Even Jose Mourinho, whom the world is forever against, has told Klopp to save his breath.

Ahead of a crucial Christmas run, ‘the most difficult time’, the German must put concerns over subs and scheduling to one side. Those are up to his bigwigs to change.

But in the dugout there are battles he can win to ensure this title defence isn’t derailed.

Be ‘braver’ with his subs

It has been a common criticism aimed at Klopp on Merseyside: he is too slow to make changes. That irony won’t be lost on his detractors. But his argument for five subs is this: ‘If you are not brave, then you have to wait for the third sub until the 90th minute.’ Only then, Klopp says, can you be confident you won’t be left with 10 men.

Against Brighton his side were hit by a late injury to Milner.

But there is nevertheless a pattern of caution about Klopp’s changes.

His decision to hook Neco Williams at half-time is only the second occasion in the league this season that, injury-enforced changes aside, he has made a substitution before the 58th minute.

In two of Liverpool’s 10 league games, he has made only two. In seven he has waited until the dying minutes to fill his quota. Against Brighton, Klopp said he would have replaced Andy Robertson had five subs been an option.

The left back then gave away the late penalty. Perhaps, to avoid more injuries and heartache, Liverpool should gamble more often.

For so long, Klopp has embodied the dynamic positivity of this team.

His passion and force of personality shone through in the spirit and fearless abandon with which Liverpool played. On Merseyside, supporters immediately idolised a manager who understood a city and its people, and whose thoughts on national conversations invariably chimed with theirs.

His energy on the touchline was infectious, too. And yet at the Amex, any Liverpool player in need of inspiration would have glanced to see Klopp chuntering away.

He spent virtually all of Saturday’s 1-1 draw in the ear of fourth official Simon Hooper, steam bellowing from his ears.

If his drive and optimism transfer to his side, surely this negativity, this sense of us against the world, will feed in too? Suddenly a boss and a team defined by their relentless positivity are locked in a vicious cycle.

Stick rather than twist

On Saturday, Fabinho and Nat Phillips were paired together for the first time and, for a while, they played like it. Too often one was drawn out and a vast hole emerged between them. Come the end, though, Klopp was lauding Phillips’ ‘exceptional’ display.

Perhaps now, given Joel Matip’s fragile body, the manager should give this pairing a prolonged run.

After all, Liverpool’s success has been built on solid foundations.

This season they have conceded 17 goals in 10 league games. Last season, it took them 27 matches to ship that number. Especially without Van Dijk and Joe Gomez, defences need consistency to flourish.

At the other end, their numbers are more encouraging. But issues remain.

Their midfield could do with the incision of Thiago Alcantara and the frontline still needs work, too. Roberto Firmino has been the sole permanent fixture — despite his struggles in front of goal — while Mohamed Salah was upset to be brought off against Brighton.

Given Diogo Jota’s superb performances, Klopp must find a way to keep all four fit, firing and happy. Not a bad problem to have.