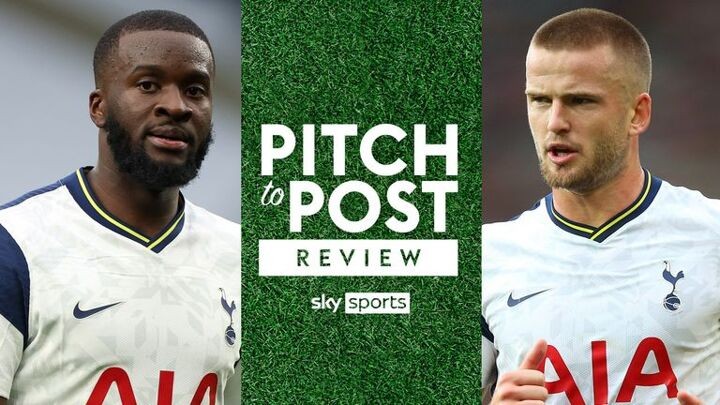 Tanguy Ndombele was once given the cold shoulder by Jose Mourinho, while Eric Dier was a regular on Tottenham's bench this time last year. Through some tough love and expert man-management, both are now key players for Spurs. How has Mourinho done it?

In the latest Pitch to Post Review podcast, Jasper Taylor is joined by Ben Ransom and Gerard Brand to analyse the pair's improvement in form this season, and why Dele Alli may be next on Mourinho's task list.

How 'stunning' Ndombele was brought in from cold

In the 2019/20 season post-lockdown, Ndombele played just 65 minutes for Mourinho's Spurs, and after being publicly criticised by his manager in March, it looked like the £63m signing's days were numbered in north London.

But now, as Spurs sit top of the Premier League, Ndombele is one of the success stories of the season at Spurs, a testament to Mourinho's man-management skills. How has he done it?

"For those of you that have seen the documentary - I'm not convinced it was Daniel Levy's speech to Ndombele that prompted the change in form. I wasn't really feeling that.

"But Ndombele is what Paul Pogba should have been under Jose at United. When he came to the Premier League there was a lot of excitement, and he didn't really deliver.

"Jamie Carragher completely laid into him on a Monday Night Football before the pandemic for a woeful performance at Burnley, where he just didn't look like he was bothering. Maybe he didn't like his role, maybe his confidence was low, but right now it's stunning what we're seeing from him.

"When this guy is good, he is so good, and his skill set is actually unique. There aren't many midfielders that have strength, explosiveness, paired with skill and a low centre of gravity to get out of cul-de-sacs. He's got a pass on him and reads the game too.

"I think Jose has found this perfect role and position for him, and it's what you'd call a Jose No 10. You actually see him roaming beyond Harry Kane to press defenders; he initiates the press, and creates these choke points for opposition defenders, but then seconds later he can be found in front of the defence helping out.

"So what's changed? I think he's reconditioned himself, which is obviously credit to him, and I think Pierre-Emile Hojbjerg takes some of the pressure off him in a defensive sense - last season he'd look around and see Harry Winks and Moussa Sissoko or Eric Dier, and now he sees Hojbjerg and Sissoko.

"He's also getting less involved in the dirty work - his tackles, interceptions and duels per game are way down on last season. And above all this is man management. Mourinho criticised Ndombele in the most public way last season, he full on questioned his desire after that Burnley game, and now he's one of his most important players."

Dele Alli may find solace in looking back at Ndombele's struggles at Spurs - the midfielder has played only 66 minutes of Premier League football this season - but as Mourinho drip feeds the 24-year-old game time in the Europa League, will the manager get the reaction he's seeking?

"It worked with Ndombele, and that's something I believe managers should be judged on; how they improve players. Mourinho didn't do nearly as much as he should of in that respect at United, but there's examples of him doing it at other clubs - putting players into the cold to get a reaction - and I think the next person on his list is probably Dele Alli.

"In games where Spurs are facing a low defence, that's where Mourinho will want Alli. To slip those passes in and do the cute work, which, let's be honest, against Man City and Chelsea, Spurs need to do less of as they are set up to play balls onto runners.

"I'm intrigued to see where he goes with that because it's quite a big fall for Dele Alli in recent months. There's no way Mourinho will leave him out in the cold permanently, it's all for a reaction."

This could be the making of centre-back Dier

After struggling for consistent playing time late in Mauricio Pochettino's tenure, England international Eric Dier is now playing, where he believes, is his best position.

Having shifted the 'versatility' tag, Dier is becoming a rock in a Spurs side with the best defensive record in the Premier League.

"He's looked a lot better at centre-half now he's been given a run of games there. Clearly he came through with a lot of ability; he was a young player, he's very physical, he reads the game well, and he can play a bit.

"Managers want to get him in the team, but when you have centre-backs who are so experienced, you often see young centre-backs play at full-back or they'll play now in that defensive midfield role. Dier did pretty well in that midfield role, he would get around the pitch, win tackles, win possession, and would give you aggressiveness in both boxes.

"I understand why he was played there, but it's good to see him finally get the opportunity to play in central defence.

"I really think this season could be the making of Eric Dier. He's been given the confidence of his manager, which is hugely important, and he's clearly been coached on those specific spills to make you a better defender. He's reading the game much better, and he's winning the aerial duels.

"Certainly for England, that's a fantastic thing moving forward. Centre-backs mature later than most other players, and I think with Dier we're seeing the makings of a very good defender now."