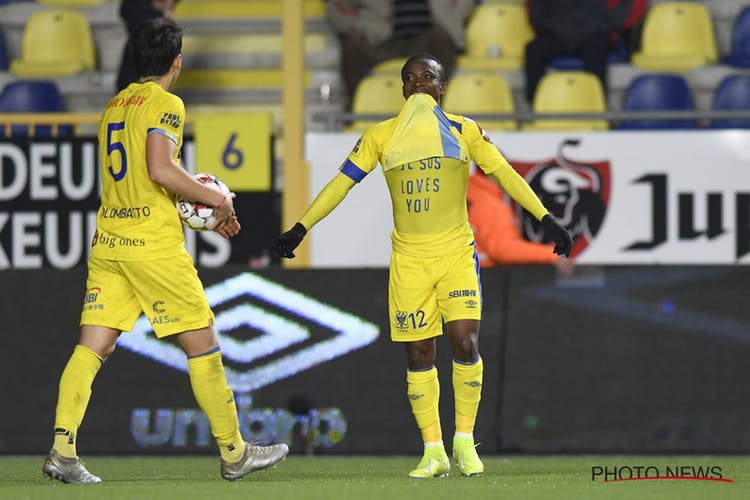 Sin Truiden midfielder Samuel Asamoah is latest to have suffered a similar fate after he was sent off for partially showing ‘Jesus loves you' inscription on his shirt after netting his first hattrick in the season.

Asamoah scored a hat-trick in the game as the Canaries run-riot their opponents 5-2 in from of their supporters at the Stayen Stadium.

The Ghanaian did not complete the match as he was given his marching orders for two bookable offenses.

He was handed a caution by referee Christof Dierick in the 52nd minute before facing the rigorous of the law after partially removing his shirt in the wake of scoring his third goal of the night.

Asamoah wanted to show off the ‘Jesus loves you' inscription on his shirt after netting his first hattrick in the season.

He becomes the latest Ghanaian player after Mubarak Wakaso was also cautioned for showing Allah is Great!' on a T-shirt underneath after scoring in the 1-0 win over Mali during the 2013 Africa Cup of Nations.

Ghanaian players are being advised to desist from displaying such religious and political slogans on the pitch.

FFA has been urged to ban Christian players from making the sign of the cross after scoring a goal.

A Muslim cleric from Saudi Arabia, Mohammed Alarefe called on football's governing body to write it into the game's laws that players be prohibited from tapping their stomach, chest, left shoulder then right shoulder to make a cross.