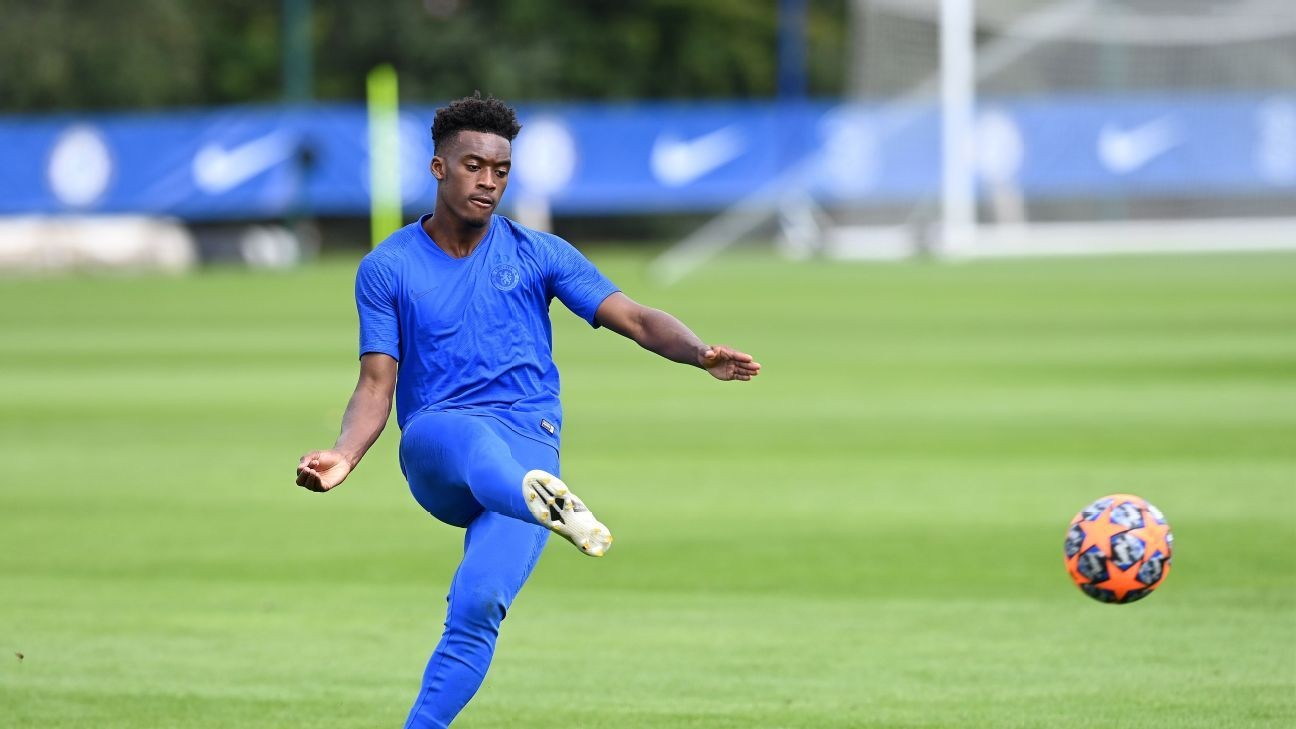 This year isn't quite panning out how any of us anticipated and Chelsea winger Callum Hudson-Odoi is no exception.

The 19-year-old England international ended months of speculation over his future and talk of a £35 million move to Bayern Munich last summer by signing a five-year deal with the club last September, following talks with newly-appointed boss Frank Lampard.

Conditions were right for youth to finally get a chance at Stamford Bridge after years of academy neglect, with a FIFA enforced transfer ban and young manager prepared to trust youth, setting up the likes of Mason Mount, Fikayo Tomori and Tammy Abraham to benefit. Everything seemed in place for the 19-year-old Hudson-Odoi -- who joined the Blues at 8 years old -- to establish himself at the forefront of Lampard's new era, yet he starts this exclusive interview with ESPN by making a frank admission.

"For me personally, I think it is not the season that I would have liked to have," he said. "I could have worked on so many aspects of my game to become a better player. I'm working hard every day and training hard every day but sometimes in a game, you want to score goals, assist goals, help the team as much possible, and I feel like this year I wasn't doing enough of that.

"So I feel myself, next season, when it comes, I have to try and get more goals and more assists, help the team as much as possible and hit the goals I set myself," Hudson-Odoi told ESPN at the launch of Adidas' new X Ghosted boots.

Hudson-Odoi has registered three goals and six assists this season from 32 appearances, only 12 of which have been starts. Injuries hampered his progress. His recovery process following an Achilles problem sustained last April delayed his first-team involvement until Sept. 25 and a separate hamstring complaint ruled him out from early February until after football's resumption in June. However, Lampard has consistently lamented Chelsea's collective profligacy in front of goal and it's a criticism Hudson-Odoi has taken to heart, particularly since the restart when he is yet to start a game, only making seven substitute appearances totaling 103 minutes.

- Connelly: What Chelsea need to do to catch Liverpool
- Hamilton: The highs and lows of Pulisic's debut season
- Stream FC Daily on ESPN+ (U.S. only)

"For me, it was more of a personal thing where, 'Cal, you can do better, you've got to keep going, keep working hard, try and get the goals and assists and help the team as much as possible.'"

He does not undertake that introspection alone. His father, Bismark, older brother Bradley and mother, Jenny -- part of a wider family including two more siblings -- form a close-knit bond. Bismark played in Ghana for Hearts of Oak, and Bradley was a youth team player at Fulham before embarking on a lower-league career that eventually gave way to representing Callum as a full-time agent.

"More of the time, I would go to my dad, brother and mum because they are the ones who are always at every game with me no matter where it is," he said.

"And they are always travelling away or home to come to games. They are the ones I always go to because they watch the game for 90 minutes and reflect with me how the game has gone, how it should go and what I should do in certain areas of the game, if it's staying wide, coming into the pocket to receive the ball, chasing back a defender, going higher to win the ball.

Callum Hudson-Odoi has endured a challenging season both on and off the pitch in 2019-20. Photo by Darren Walsh/Chelsea FC via Getty Images

Hudson-Odoi's has had a challenging year even beyond injuries, not least becoming the first Premier League player to contract the coronavirus in March.

"It was crazy to be fair," he said. "I said to myself, 'I didn't even know this was even in England.' At the time, I was thinking to myself, it is a virus that has come around. I've heard it's in Spain, other countries where I'm like, 'Oh, this is very dangerous, but I didn't know it was in England as much. When I heard it was coming to England, I was thinking, 'OK, maybe it is up north, further away from us where it won't really come around us,' and then for me to even have it, I was just so shocked. I was like 'Are you sure I really have it?'

"The virus went quick. For me, I literally felt like I had it for a couple of hours. I felt hot and cold for a bit and after that, I felt back to myself, normal, everyone was fine. I didn't feel any symptoms, I felt good and I started doing a lot of training at home with my dad, doing a lot of gym work and bike riding in the house.

"But then also going late night jogging, making sure I'm staying healthy and keep doing the programme they sent us from Chelsea."

There was speculation at one stage that Hudson-Odoi had grown frustrated at a lack of first-team football and was considering his options, but sources have told ESPN no such discussion was held and he remains fully committed to the cause.

There have, frankly, been bigger issues in play, not least the Black Lives Matter movement, which has maintained positive momentum throughout the restart, as Premier League and FA Cup matches have begun with all players and officials taking a knee for eight seconds in a show of solidarity following George Floyd's death in May.

Hudson-Odoi has suffered racist abuse, on what should have been a night of unbridled joy: his full England debut in March 2019. England beat Montenegro 5-1 in Podgorica with Hudson-Odoi playing a starring role but he was one of several black players subjected to sickening chants, which later led to FIFA sanctions.

"You're like, 'Wow, what is this? I'm being called certain things,'" Hudson-Odoi said. "At a young age as I was, I'm like, 'Wow, I shouldn't be hearing it. None of us should be hearing this stuff.' We should all be enjoying the sport of football, smiling.

"If your team is losing, you shouldn't be calling other players certain things because your team is not winning the game or you are frustrated about how your team is playing. For me, when I started hearing stuff like that, it really made me think, 'Wow, this is not right. You shouldn't be hearing this.' For me, personally, I kept saying to myself, 'You know what, stay positive, don't think about it too much. Stay positive, keep happy.'

"It is extremely important that we send a message out across to everybody that Black lives matter because it is a thing where racism shouldn't be in our game at all, shouldn't be around at all. It doesn't matter who you are, what colour you are, you should all be treated the same, all equal."

Talk of England offers fresh optimism for the future. Hudson-Odoi welcomes the internal competition that has emerged at Chelsea with Christian Pulisic thriving, Hakim Ziyech, Timo Werner and perhaps Kai Havertz joining the club -- and his determination to respond to that challenge should have a knock-on effect for Gareth Southgate.

Euro 2020 will now take place next summer, giving Hudson-Odoi an extra year to assert himself for club and country, aiming to add to the three international caps he currently has. That process begins Saturday night with Chelsea facing Bayern Munich in Germany and attempting the daunting task of recovering a 3-0 first-leg deficit in their Champions League round-of-16 tie.

"We're obviously trying to build a good team for the future, not just for now," Hudson-Odoi said of Chelsea. "Players that are coming in are top players and they've done really well at their previous clubs so hopefully they can do that here as well.

"It doesn't really matter if you've been bought or you're at the club already or whatever it is. You've always got to fight for your position and show the manager, your teammates, the fans why you should be playing every game, keep improving every day.

"[The Euros being delayed] has helped me in a way because obviously the couple of injuries that I've had this year, have halted me in games and stalled a bit of my, not just game time, but playing because I've had injuries, come back from them, started again, restart, then [been] stop and start.

"So this Euros being pushed back is a big help for myself in terms of like, 'OK, you've got another whole season to prove to yourself that you are ready for the Euros, you can go there and everything will be fine -- no injuries, be injury free.'"