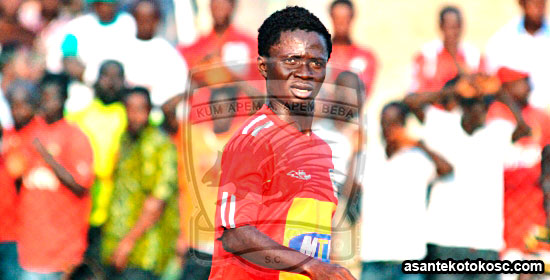 Ghanaian winger Richard Mpong has insisted that he was not treated fairly during his time at giants Asante Kotoko.

According to the Elmina Sharks player, he wasn't appreciated by the fans and left with so much pain and sorrow despite giving his all.

“I loved Kotoko. I had a passion for the club. My entire family is a Kotoko family so I really wanted to play for them even while I was playing for Medeama,” Mpong said in an interview with footballmadeinghana.com.

Mpong said that he was accused of masterminding the sack of head coach David Duncan. The former Hearts of Oak trainer was sacked in 2016 after less than a year at the club.

“… they gave me a bad name, tarnished my image before I left the club and never gave me the opportunity to explain myself. I joined the club with blistering happiness but left with pain and sorrow,” he narrated.

“I was branded the leader of a clique that wanted David Duncan to fail to the extent that a notorious fan of the club who was noted for his close relationship with leadership, Seidu MBA was on the radio claiming I took losing bonus from Dr KK Sarpong to share for the players who were hired during Didi Dramani’s era when Kotoko lost 2-1 to MC El Eulma in the CAF Champions League round of 16.

“I was shocked to the marrow when Opoku Nti spoke to all the players who were alleged to be members of that clique but never spoke to me.

“I felt disrespected and disappointed that the club I helped to win two league titles and two FA Cup trophies could treat me like that,” he added.

The 29-year-old has been capped six times by Black Stars.