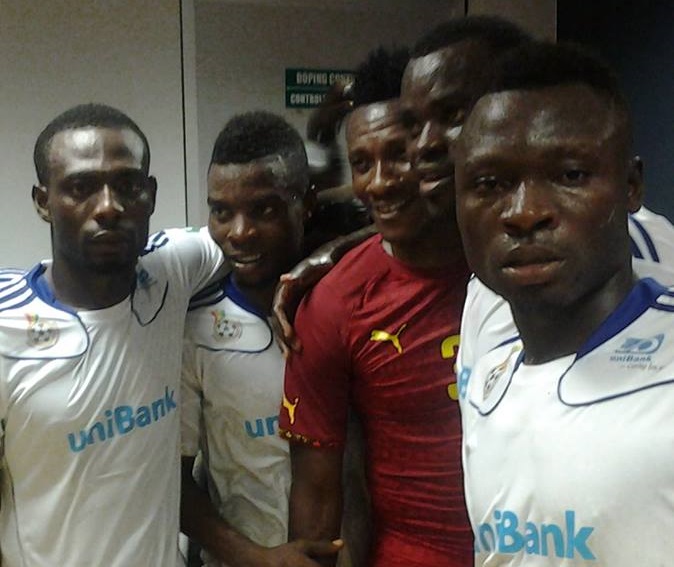 Ghana Premier League star Bright Adjei whose spectacular goal has gone international in the CNN Sports Goal of the Week has revealed he tried to imitate Luis Suarez's strike against Arsenal in the Uefa Champions League.

The former Ghana Olympic squad attacker struck the equaliser for Aduana Stars with a glorious 90th minute acrobatic finish at the Len Clay Stadium in Obuasi.

While Aduana were delighted to steal a point from the tie, Adjei's goal is already in competition for the Ghanaian goal of the season after the eye-catching strike got nominated alongside goals scored by Pumas's Javier Cortes, Barcelona star Luis Suarez and Tom Rogic for Celtic in the Scottish Premier League.

But he is not ready to hide anything as he reveals he tried imitating the goal scored by his topmost contender Luis Suarez - when the Uruguayan goal-wizard scored with a diamond-gilded strike against Arsenal in the Uefa Champions League.

"[I was watching the Uefa Champions League game between Arsenal and Barcelona and saw [Luis] Suarez score that goal. I always wanted to score a goal of that caliber so I prepared for it and when the opportunity came I took it well]," he told Accra-based Asempa FM.

Adjei, 22, moved to former Ghana Premier League title-winners Aduana Stars from relegated Tema Youth before the start of the current season and he is aiming to finish the season with 20 goals.

"I hope to score more goals and that should be around 20 goals," he added.

You can cast your vote for Bright Adjei in the competition for the CNN Goal of the Week below.

Have your say on the CNN Goal of the Week: