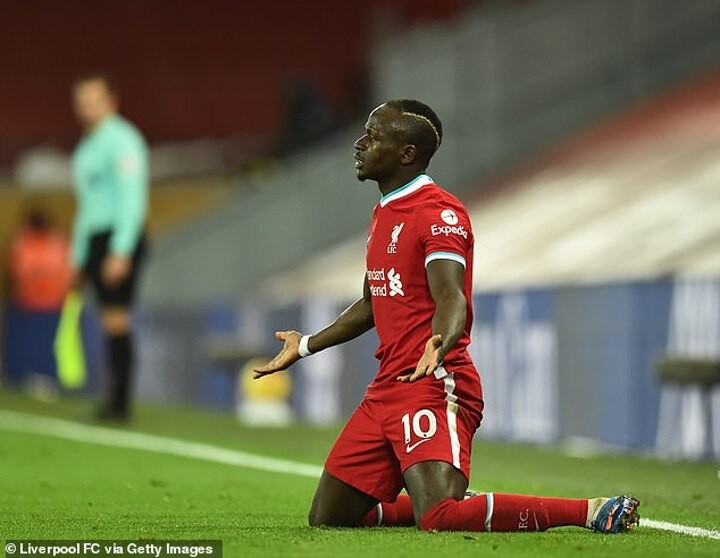 One of the most impressive things about the careers of Lionel Messi and Cristiano Ronaldo has been their consistently high levels of performance over the best part of a decade. Mo Salah is currently discovering how difficult that is to do.

Salah has been a tour de force since arriving at Anfield three and a half years ago. Few players have ever made such an impact. The Egyptian averages almost exactly one goal every other Premier League start, something that points to exceptional quality.

But this currently is not his time. Nor is it a period of productivity for Roberto Firmino and Sadio Mane. Liverpool’s fabled front three were flat at Anfield and not for the first time. The worry for Jurgen Klopp and Liverpool is how long that will last.

The numbers can be a little deceiving.

Salah has scored 13 Premier League goals so far, which is a decent return. But five have been penalties and anybody who has seen him and indeed his two attacking colleagues play this season will know that things are simply not the same.

Liverpool have no zip and no imagination in the final third of the field. They have no confidence either, which is arguably more important.

We are used to Salah, Mane and Firmino creating openings out of nothing, either from some trickery or having the courage and belief to roll or turn a defender. There was none of that at Anfield on this occasion.

Two moments that arrived in close succession in the second half illustrated the problem. First Salah lost out of Harry Maguire in the penalty area at the Kop end. Facing a position he normally relishes, Salah was simply dispossessed far too easily.

Then, almost immediately, he had the opportunity to front up Luke Shaw.

Usually, two things are possible if not likely in such a scenario. Salah can either blow right past his opponent or draw a foul and win a penalty. Here, Salah turned away from his man and played a pass 15 yards back towards his own midfield.

It was an option Salah would not usually even consider and the incident was notable enough for Gary Neville to mention it on Sky commentary. A full-back himself, Neville knows full well what kind of message that decision imparted to the defender. It tells him he is winning the battle.

All players have poor games. What is concerning for Liverpool is that the relative struggles of their front three have been going on a while and it is hard not to wonder if the high intensity of the champions’ football is catching up on a few of their players.

Any fitness and conditioning coach will tell you that a team that plays with such high energy will inevitably find that the stress of the season impacts on players towards the end.

This year, with players unable to recuperate fully because of the hectic schedule, it’s possible that some of that mental and physical fatigue has arrived a little earlier than expected at Anfield.

Here, on such an important afternoon, United defended excellently during the periods of the game that Liverpool dominated. Shaw has probably never played better during his strange six and a half years at United. The 25-year-old was imperious.

Maguire was not far behind, meanwhile. When the United captain was sent off for England in October just ten days after being part of a team beaten 6-1 at home by Tottenham, it seemed as though his season was about to implode.

All this came at a time when he was trying to prepare a court appeal after a conviction for what happened on the Greek island of Mykanos back in September.

Since that time, Maguire’s football has been terrific. The central defender must possess great mental strength to do what he has done. In this game, partnered by the Swede Victor Lindelof, Maguire played with great authority.

Liverpool played some good football for the first half an hour of this fixture and had United’s back four dropped their levels at any moment the home team would have scored.

Liverpool did have chances. Firmino was wasteful. On other occasions, they chose totally the wrong final pass options. That is something else that points to low confidence in sport. It scrambles the mind.

The truth is that Klopp’s team are way down on last season’s levels. They are hampered by the fact their two best midfield players – Fabinho and Jordan Henderson – are playing in defence and that other useful options, Diogo Jota and Naby Keita, are not fit.

However, that only partially explains their current troubles. Liverpool had enough of the ball to seriously trouble United at Anfield and they very rarely did.

So who does a single point suit most after this? Strangely, it feels like Liverpool.

United had an opportunity to do something significant here but didn’t really seem to realise it until it was too late. The two best chances of the game fell to Bruno Fernandes and Paul Pogba in the last quarter of an hour and that was indicative of how strongly Ole Gunnar Solskjaer’s team finished the game.

It will be still be a surprise if United finish their season ahead of Liverpool. But a six-point cushion at this stage would have given them something to hang on to.

Liverpool need to find some solutions to a surprise reversal in their direction of travel. They look lifeless, toothless and occasionally clueless.

When did we last say that?