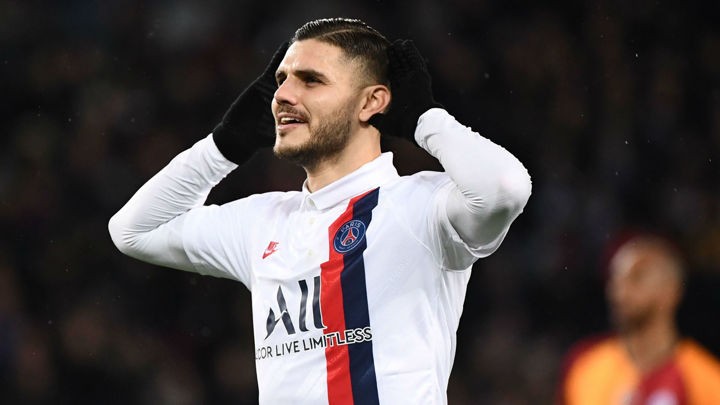 Mauro Icardi has signed a contract to stay at Paris Saint-Germain on a permanent basis, Inter sporting director Piero Ausilio says, but the two clubs are yet to reach an agreement over a fee.

The Argentina international joined the French champions on loan in September and went on to score 20 goals in 31 matches.

PSG have the option to sign him outright for around €70 million (£63m/$78m), but the clause is only valid until the end of the month. The club are ready to sign him on a long-term deal, but the 27-year-old may be too expensive because of the coronavirus pandemic.

"I know that the boy is happy to stay in Paris,” Ausilio said to Sky Sport. "PSG can exercise the option to buy him and that expires on May 31.

"There is a figure that has obviously been affected by the health emergency, so we will see. We talk with Leonardo often and I know the player has signed a contract that would allow him to stay there. We will find a solution."

Inter have been linked with the signing of RB Leipzig star Timo Werner, while Liverpool, Chelsea, Manchester United and Barcelona are all reportedly interested, too. Ausilio, however, says the Nerazzurri are not planning on a bid this summer.

Meanwhile, Lautaro Martinez is said to be at the top of Barcelona’s list of summer targets but Inter are confident he will still be part of Antonio Conte’s side next term.

"We have invested in him since he was very young because we thought he was ready for the first team,” Ausilio added. "In recent years he has developed a lot and can improve further thanks to Conte, the playing system and a partner like Romelu Lukaku.

"He is an important asset for the club, there is a €111 million (£100m/$123m) clause he could leave for but it is very tough because it has very specific deadlines and is only valid until July 7.

"Inter do not need to sell, nor do we want to sell our best players, but we want to strengthen ourselves. I know there is interest from Barcelona, but we have not entered into any negotiations with them because they know our stance. We imagine Lautaro at Inter and he still has a three-year contract with us."