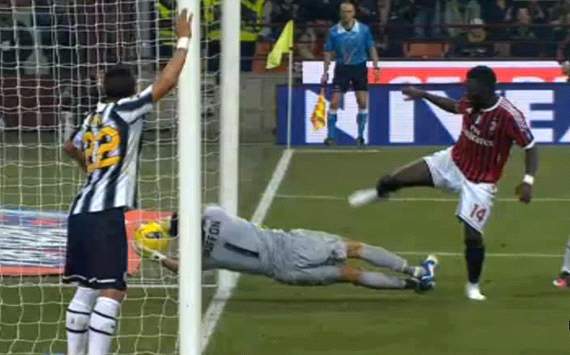 Buffon 'saves' Muntari's goal which was not allowed to stand

Former Italian referee Paolo Tagliavento says he would not have allowed Sulley Muntari’s ghost goal had VAR been in existence in 2012.

That incident was one of the main reasons why goal-line technology was introduced, as during a Scudetto showdown at San Siro in February 2012, Muntari’s shot for Milan was palmed away by Gigi Buffon, but only after it had crossed the Juventus line.

“Muntari’s goal was my most obvious error and nowadays it would’ve been resolved within a 10th of a second with technology,” confessed Tagliavento to Radio Punto Nuovo and Il Messaggero.

“It’s an issue of everyone having their roles, because at the time when we didn’t have additional referees, nor goal-line technology, the only real way of gauging whether the ball had crossed the line was the assistant referee.

“At that moment, he assured me it had not crossed over completely. From my position, I certainly couldn’t over-rule him.”

Despite that incident, Tagliavento had been against the idea of bringing VAR into the sport.

“My final Serie A season was the first with VAR. I was among the most sceptical, as I’d been a referee for 30 years and had so many doubts about this technology.

“However, that was until the first round of the season, when at the end of the first half I realised the gigantic potential of this instrument, which today is indispensable.

“If I’d had VAR, it would’ve allowed me to avoid the five worst errors of my career.”

Tagliavento does not consider the infamous Inter match that prompted Jose Mourinho to do the handcuffs gesture to be one of those errors.

“It irritated me, but only for a moment. Everyone said I refereed that game very well.”