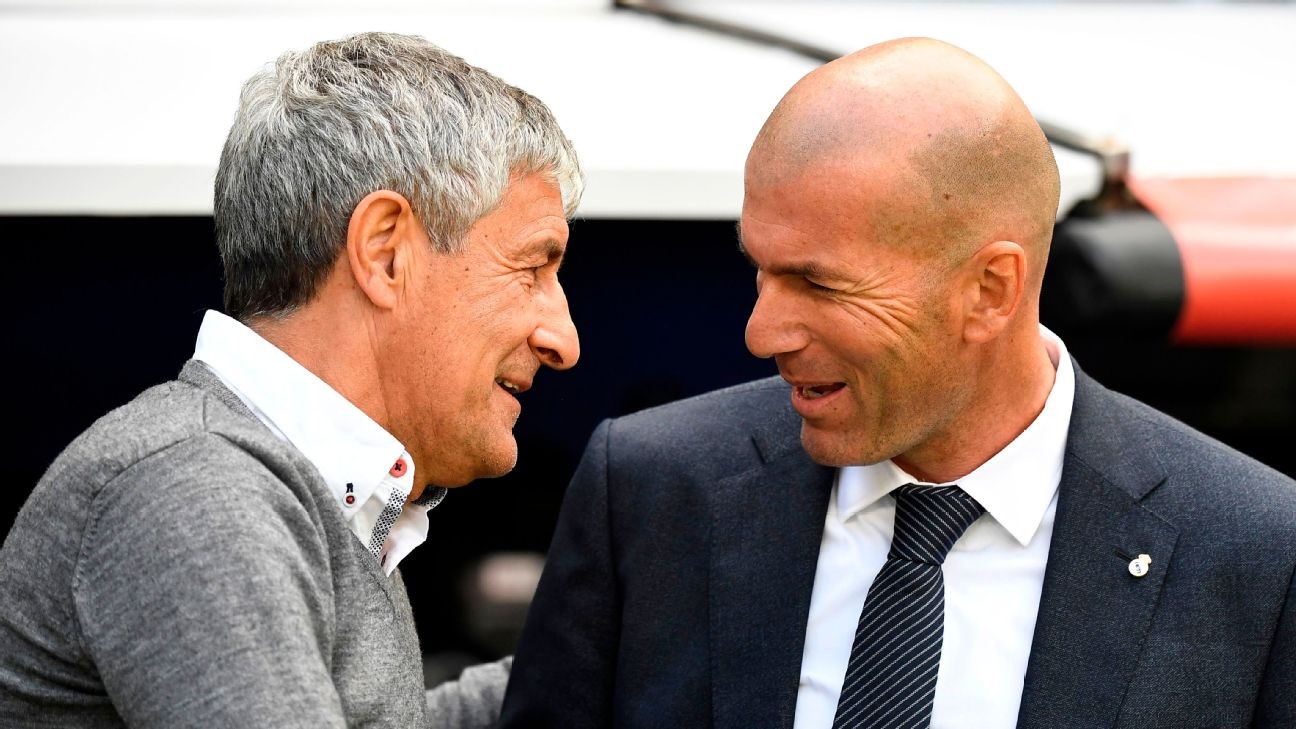 Unless you believe that Getafe, with European football to distract them and the possibility of losing their talismanic goal-scoring substitute Angel to Barcelona, can close a 10-point gap on La Liga leaders Real Madrid, then we must accept that Spain now has a 15-game, 15-week two-horse race for the title: Barcelona vs. Real Madrid.

If it's a reduced field, then, at least it's between two thoroughbreds (who happen to meet at the Bernabeu on March 1). One which has known its way to the finishing post almost by regal instinct throughout the past 15 years -- often winning at a canter. The other younger, more muscular, fiery, looking like it has the legs and lungs to take down the champion.

But this past weekend emphasised something about the jockeys: Quique Setien and Zinedine Zidane. While racegoers would tell you that it's almost always about the quality of the horseflesh, why is it that some jockeys spend a career lifting prize fee after prize fee? Because they matter. Thus, I think, it'll prove to be between now and May. One thoroughbred has a distinct advantage in terms of who's in the saddle.

First things first: Barcelona are gradually improving under Setien. Ernesto Valverde's reign ended with them disastrously unable to protect a one-goal lead with time running out against both Espanyol in the Catalan derbi and Atletico Madrid in the Spanish Supercopa semifinal. Since Setien took over, the reigning champions have had bad days and their flaws are not anything like wholly corrected, but one of the positive signs is that they've protected single-goal leads against Granada, Levante and now Real Betis.

Little by little, Setien's pupils look sharper; slightly quicker off their toes, slightly longer on stamina and beginning to move the ball in a way that is, at least, not totally alien to the best days of the Camp Nou in those 15 years of rarely broken domestic domination: pass, move, press, win possession, pass, move, score.

Frenkie de Jong is beginning to break lines. Ansu Fati is starting to impose himself. Clement Lenglet is scoring goals and has proven that he's far ahead of Samuel Umtiti in the pecking order. Sergio Busquets, very slowly, is becoming recognisable once more. Arturo Vidal and Lionel Messi are having a shot at recreating the previously exclusive society from which Messi and Luis Suarez benefitted so much.

But Setien, compared to Zidane, is a novice. Not simply at winning trophies, not because he didn't have a career worth a hoot compared to the great Frenchman. No. Setien has staunch, clear-cut and highly entertaining footballing principles: win the ball quickly, pass it sharply and repetitively, move off the ball, creating supporting triangles of passing options for the man on the ball, try to take control of a match.

Win, yes, but win with flair and attacking verve if at all possible. Simply because he's at Camp Nou, suddenly with better players than ever before, there's nothing for him to update about the football ideals that have sustained him through his playing days and past his 60th year.

Add the fact that your squad is composed of multi-multi millionaires -- one of whom earns about €100 million a year -- and full of guys who've genuinely seen it all, done it all, and the difficulty factor multiplies by about the numerals contained in a Messi pay packet: millions.

Zidane is in a different situation, and it shows. More, we are talking about the very factor most likely to differentiate the two men in the 15-match race to the tape.

He took over a rabble last season. He was the third coach in that term; the players were either tired, bored, under-cooked or half-hearted. His appointment of fitness coach Gregory Dupont has been a masterstroke.

Unlike Diego Simeone, who's stuck with an increasingly unpopular and outdated fitness coach in "Profe" Oscar Ortega, Zidane's new appointment has utterly revitalised Los Blancos' squad. It took time -- witness the 3-0 defeat at Paris Saint-Germain in the autumn -- but for many weeks now Madrid probably only have Getafe as rivals in the fitness-stamina-sharpness stakes.

But with this newly revitalised raw material Zidane has worked wonders. I'm not claiming that, in comparison to Setien or any of his elite rivals in Europe, Zidane is an outright tactical genius. Instead, to me, the 47-year-old possesses qualities that remind me of a young Sir Alex Ferguson.

Quique Setien and Zinedine Zidane will determine whether the La Liga crown goes to Barcelona or Real Madrid.

Ferguson, whether at Aberdeen, where he won two European trophies, or at Manchester United, where he dominated England, wasn't generally understood to be a tactical genius. His genius lay in implacably understanding his resources. Who was strong? Who was his on-pitch lieutenant? Which guy needed pushing? Which guy was self motivated? Which player would need a rest in five weeks' time? Which star was on the wane and needed selling? Ferguson was not flawless, even in this aspect -- take his handling of Jaap Stam and Roy Keane, for example.

But when you speak to any alumni of that Ferguson era at Old Trafford, they'll tell you of the enormous hold the Scot had over each and every one of his successful footballers. He told them something and they believed it. They cringed at the thought of letting him down. He imbued them with not just a winning attitude, but a brutal hatred of defeat. He was, to them, a guru; someone who convinced, who inspired and who cajoled all at the same time.

Zidane may not be as publicly fiery as Ferguson, but his ability to understand his playing staff -- what they need to motivate them, when to play them, when to rotate them, when to bring them on in matches and, above all, when to take an instinctive risk (so Alex Ferguson) -- is what elevates him above not only Setien but almost every top manager in Europe.

Sunday was an example. Just as in recent weeks Zidane has rested Raphael Varane, Casemiro, Luka Modric and Federico Valverde in matches in which it appeared folly not to use his best players without exception, he left out Toni Kroos and the in-form Vinicius for what undoubtedly appeared like an ultra-challenging test in Pamplona against Osasuna.

The midfield functioned. Isco, deputising for Kroos, scored and was in the top three or four performing players. Modric, played as a second striker, had one of the great games of his season and was involved in three of the four goals. When the game was simmering and tense, Zidane brought on Lucas Vazquez (who scored) and Luka Jovic (who also scored). It felt like the man who broke the bank at Monte Carlo, saying "Let it roll" as his roulette chip towers built up on zero again and again and again.

Whatever Zidane touched: gold. It's been the same for the past few weeks.

Mr. Midas rests Valverde against punchy, punishing Getafe away, brings him on with 20 minutes left and the Uruguayan produces an assist for Modric. "Zizou" leaves a tiring Lucas on against Sevilla, much against expectation given that it's the Galician's first appearance after a two-month injury absence, and Lucas rewards his manager by crossing for Casemiro's headed winner.

Against Valladolid with Dani Carvajal suspended, Zidane doesn't choose the younger, faster, taller, fitter Eder Militao to deputise at right-back, he chooses the loyal, likeable but low-on-form Nacho. For a late corner, Zidane instructs the diminutive defender how and where to attack the ball, and Nacho heads home the winner.

Against Atletico, Zidane mucks up the first-half tactics and personnel choice. Without hesitation he corrects it at half-time, brings on two wide men and Vinicius, who's getting personal tuition from the French World Cup winner and multi-time Champions League-winning coach, catalyses the move for the 1-0 winner.

Zidane is in the zone. He knows his troops inside out, judges brilliantly what to ask of them, when to feed and water them and when to shout "Into battle!" It's fascinating to watch.

Not to be unfair to Setien, he's new in the saddle. His refusal to use Vidal at Athletic Bilbao in midweek possibly cost Barcelona a place in the Copa del Rey semifinals. His distinctly odd decision not only to rest Ansu but to not then introduce him at half-time at Betis while Rubi's side played a ridiculously high defensive line and Barcelona screamed out for another player to run beyond that flimsy barrier and collect passes from Busquets, Messi and De Jong, well, that felt bizarre.

There are other examples: starting off thinking that Umtiti -- slow and in terrible form -- should keep Lenglet on the bench, proclaiming that the notoriously injury-prone Ousmane Dembele was going to be "like a great new signing" about two days before the Frenchman collapsed in a heap again and wrote off the rest of the season.

Football is like that. Decisions come at a cost, fortune only favours the brave sometimes, and Setien is inarguably making progress. It's just that time between now and the crucial months in which this league will be decided is very tight indeed.

And while there looks to be a slight advantage to the machine in royal white colours that is a nose ahead more than halfway around the course, I think that Zidane is the rider who has the confidence, the knowledge and the little sprinkling of magic dust that will help Madrid gallop away from the popular champion and burst past the winning post -- probably before we've reached May.