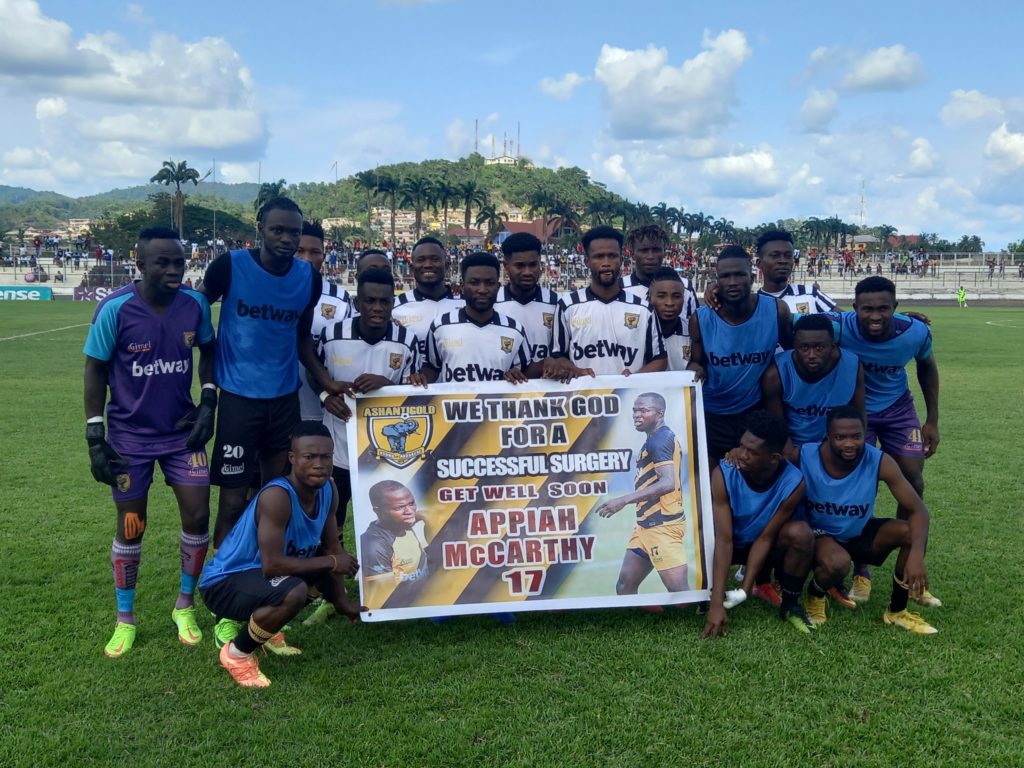 AshantiGold SC will be looking to make amends from the Ashanti derby defeat to Asante Kotoko SC last week when the face Ebusua Dwarfs this Sunday in Obuasi.

The Miners lost 1-0 to the Porcupine Warriors making it three consecutive losses in the Ghana Premier League.

AshantiGold need to back up against the Crabs at the Len Clay Stadium to get back to winning ways as relegation is stirring at them in the face.

The Gold and Black outfit are currently lying 11th on the league standings with only four points above the relegation zone.

Stop gap coach Thomas Duah will personally be seeking for a revenge over Dwarfs on Sunday.

Duah was in charge when AshantiGold suffered a 2-1 defeat in the hands of Dwarfs in the reverse fixture at the Cape Coast stadium.

The Miners will welcome back youngster Emmanuel Owusu in the fold after recovering from a long-term injury.

Striker Gordon Kusi Brokelyn is expected back in the match squad to face Dwarfs on Sunday.

Dwarfs are travelling to from the coast to the mining town with enough confidence after that victory over Aduana Stars at the Cape Coast stadium last weekend.

Simon Martey's goal gave the Crabs a 1-0 victory which cushioned them in their fight against relegation.

Dwarfs found themselves in the relegation zone as they sit at the 16th position on the league standings with only one point adrift the safety places.

The Abontoa Abontoa Boys require a victory over AshantiGold on Sunday to move out of the relegation zone.

Dwarfs are going into this fixture with an abysmal away form since the start of the second round of the season having lost all of the their five games as visitors.

They have managed only two points from their last nine journeys to Obuasi in the premiership.

Head coach Ernest Thompson Quartey has a fully strength squad at his disposal for selection on Sunday against AshantiGold.