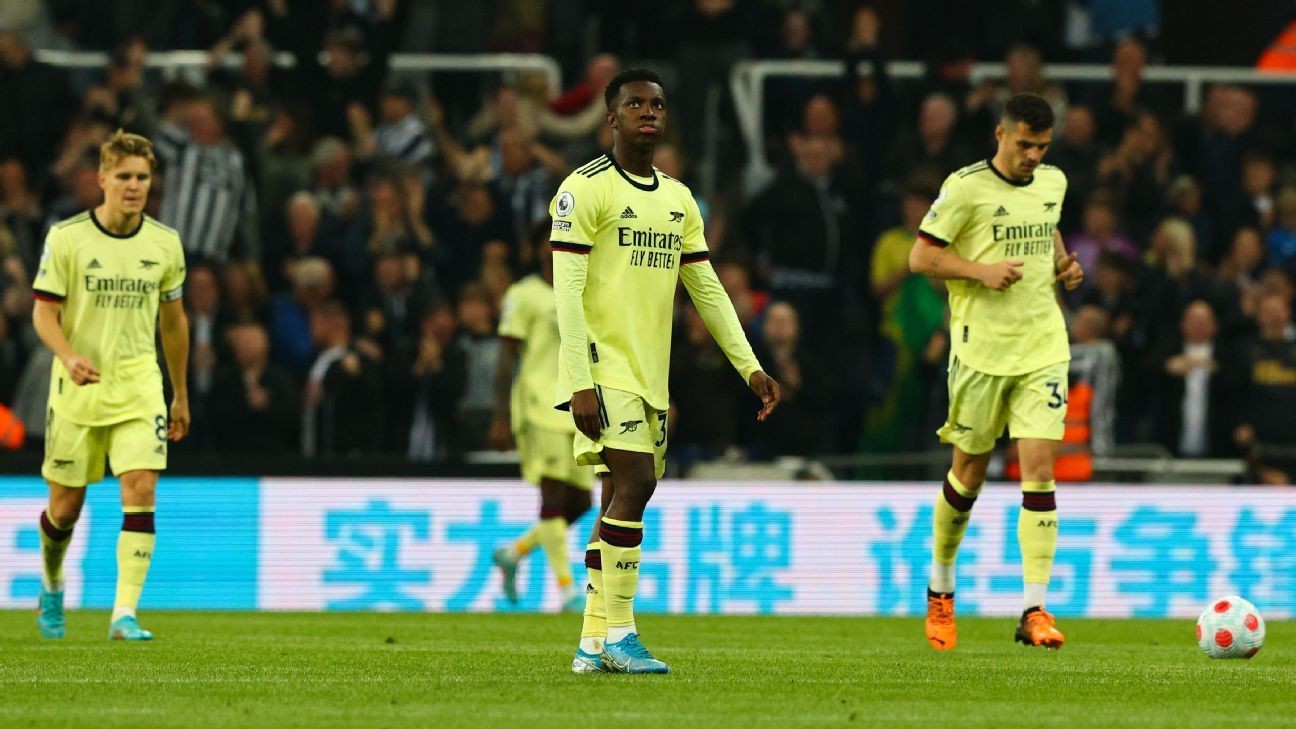 Mikel Arteta said Arsenal must "swallow the poison" after a 2-0 defeat at Newcastle United left his team facing failure to qualify for the Champions League for the fifth successive season.

Arsenal had been one win away from sealing a top-four spot and returning to the Champions League for the first time since 2017 ahead of last Thursday's North London derby against Tottenham Hotspur.

But a 3-0 defeat against Spurs, followed by Monday's loss at St James' Park, means Arsenal go into the final weekend of the season two points adrift of Tottenham and needing Antonio Conte's team to lose at relegated Norwich City to have any chance of qualifying for the Champions League.

Gunners manager Arteta said, though, that his team could have no excuses following their defeat against Newcastle.

"Tonight, we have to swallow all the poison that we feel and go again tomorrow," Arteta said. "It was a really tough match. Normally, I sit here and defend what we have done, but Newcastle were 100 times better than us in every department, from beginning to end.

"It's very hard to accept it. We knew what to expect from Newcastle, but didn't cope with it and didn't compete.

"We were in trouble time after time, lost every duel and were second best all the time. Newcastle probably deserved a bigger margin as well.

"I will always defend my players, but tonight that's a really difficult thing to do."

Arsenal players react during a loss to Newcastle in the Premier League. Getty

Despite the odds now heavily favouring Spurs in the race for fourth, Arsenal can still leapfrog their rivals if they win at home to Everton and Norwich, who have won just once in 16 games, claim a shock victory against Spurs.

Arteta added that his team have to go into the Everton game believing in their chances.

"We need to win, they [Spurs] need to lose. In football that can happen, so from tomorrow we'll prepare for Everton. It's still mathematically possible.

"But we have to put our head down and accept this performance was nowhere near the standard required for the Champions League."

Arsenal midfielder Granit Xhaka was even more pointed in his assessment of Arsenal's performance in the loss, saying the Gunners didn't deserve a spot in Europe's top continental competition next season.

"People speak always about leaders. We're not playing tennis, we're playing football. If someone is not ready for this pressure, stay at home," Xhaka said. "You can't come here and play like this. We looked very bad today. The game plan was totally different. We played a totally different game.

"They were running us over from the first minute to the 96th. When you play like this you don't deserve to play in the Champions League.