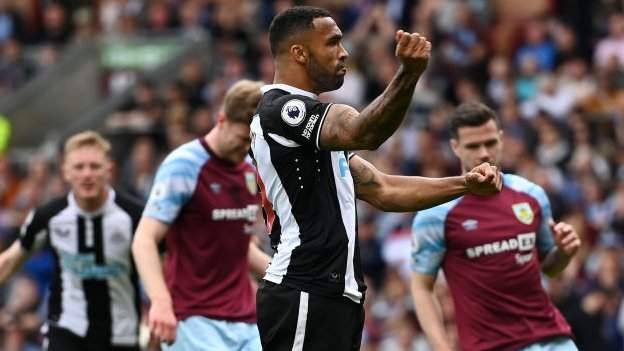 Burnley were relegated from the Premier League on a dramatic final day as a home loss to Newcastle United condemned them to the Championship.

At the start of the day, Burnley were above Leeds on goal difference, but Jesse Marsch's side won 2-1 at Brentford to end the Clarets' six-year spell in the top flight.

Callum Wilson scored twice for Newcastle through a calm penalty after Nathan Collins' needless handball, then from Allan Saint-Maximin's cross.

Burnley, who sacked long-serving manager Sean Dyche with eight games to go, got a goal back as Maxwel Cornet blasted in a volley after his first effort had been parried by Martin Dubravka.

When Leeds' advantage was cancelled out at Brentford there was fresh hope among the home fans, but their team could not force an equaliser - and Leeds' injury-time winner meant even that would not have been enough.

A miserable end to a tough campaign for Burnley

Some Burnley fans were calling this the team's most important match since 1987, when they beat Leyton Orient to avoid dropping out of the old Fourth Division and out of the Football League altogether.

And to lose such a match - particularly at home - was a terrible way for their time in the elite to come to an end.

At full-time, some players fell to their knees before joining interim boss Mike Jackson in applauding the fans.

But the brutal truth is Burnley have not been good enough this season. They have been in the bottom three most of the campaign having failed to win any of their opening nine games, with an 11-match winless run following soon after.

To the surprise of the club's fans, pundits and players, Burnley owner and chairman Alan Pace sacked Dyche in April, with under-23s coach Jackson given the task of keeping them in the Premier League.

He had taken 11 points from his opening seven games, but his team produced a tame first half at Turf Moor as they only registered one shot on target.

When Wilson scored his second, it looked all over before Burnley finally gave their fans hope of an incredible fightback.

With Leeds still drawing, Burnley produced their best football of the afternoon as Jack Cork had an effort cleared off the line by Matt Targett, before Cornet twice had efforts at goal and Ashley Barnes had a shot saved.

But Burnley ended the season with the second fewest total of goals, with only bottom-of-the-league Norwich scoring fewer, and their failure to finish off their late chances saw them exit the Premier League.

Attempt missed. Callum Wilson (Newcastle United) left footed shot from outside the box is high and wide to the left. Assisted by Martin Dúbravka.

James Tarkowski (Burnley) wins a free kick in the defensive half.

Attempt saved. Callum Wilson (Newcastle United) right footed shot from outside the box is saved in the top centre of the goal.

Attempt blocked. Dwight McNeil (Burnley) left footed shot from a difficult angle and long range on the right is blocked.

Attempt blocked. Jack Cork (Burnley) right footed shot from the centre of the box is blocked. Assisted by Maxwel Cornet.

James Tarkowski (Burnley) wins a free kick in the defensive half.