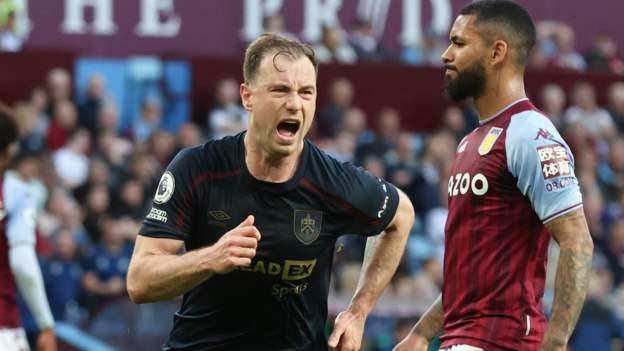 Burnley secured a precious point at Aston Villa that was enough to move them out of the Premier League's relegation zone and put their fate in their own hands heading into the final game of the season.

However, Villa were the better side and the least they deserved was the draw given to them by Emiliano Buendia's equaliser in the 48th minute.

Burnley's goal difference advantage over Leeds means there is no realistic chance of them going down if they beat Newcastle at Turf Moor on Sunday.

Their position would have been even better had Wout Weghorst not somehow failed to convert after being set up by Connor Roberts, whose own effort had been brilliantly saved by Emiliano Martinez.

Burnley were the ones defending desperately at the end though after substitute Matt Lowton was sent off in stoppage time - barely five minutes after coming on after catching Calum Chambers with his follow-through as he over-reached to win the ball.

Reaction from Aston Villa-Burnley, plus the rest of Thursday's Premier League gamesGo straight to all the best Villa contentVisit our Burnley page

The perceived wisdom is that Burnley have an advantage in the survival battle because they have been down this road so many times before.

The reality is they have never gone into the final day with their top-flight future at stake.

What they do have is home advantage in addition to their position in the table, which, thanks to one strike of the ball, is markedly better than it was at kick-off.

Even though Maxwel Cornet was brought down by Buendia for the spot-kick, there was no chance of the Ivorian taking it after his miss at West Ham last month.

Barnes kept his nerve despite a slight delay and found the bottom corner as Martinez went the wrong way.

There was no doubting goalkeeper Nick Pope was their man of the match though as he repelled Villa on at least half a dozen occasions.

The one-handed effort to turn away Bertrand Traore's second-half strike was superb and, as Villa pushed on for the winner, the England keeper twice prevented Danny Ings from putting the home side ahead.

While Tyrone Mings' block to turn Weghorst's late shot wide was superb, he shouldn't have been given the opportunity to keep the ball out.

If that had gone in, Burnley would only have needed a point on Sunday. As it is, Mike Jackson needs his side to get three to be certain of completing a most unlikely escape act.

Although it would take an unlikely sequence of results on the final day, Villa could still secure their first top-10 finish since 2011.

However, most attention for them will centre around whether they can shake up the Premier League title battle.

As with many teams at this time of the campaign, Villa's issue is maintaining focus. The good news for Liverpool, given the massive favour they need from Steven Gerrard and his team, is they have not relocated to the beach just yet.

They were the better side in the first half, with John McGinn drawing two excellent saves out of Pope.

And it was the Scot who delivered the precise pass through the Burnley defence that created Buendia's equaliser.

Evidently, the Clarets do not have the luxury of bringing on a substitute in the class of Philippe Coutinho or Ings, as Villa were able to do in the final stages.

Neither was able to fashion a winner in this game and the red half of Merseyside will hope they were saving their heroics for Sunday.

Jack Cork (Burnley) wins a free kick in the defensive half.

Calum Chambers (Aston Villa) wins a free kick in the defensive half.

Attempt saved. Matthew Cash (Aston Villa) left footed shot from the centre of the box is saved in the top right corner. Assisted by Lucas Digne with a cross.

Attempt saved. Danny Ings (Aston Villa) left footed shot from the left side of the box is saved in the bottom left corner. Assisted by Emiliano Buendía with a through ball.

Attempt saved. Philippe Coutinho (Aston Villa) right footed shot from outside the box is saved in the top centre of the goal. Assisted by Douglas Luiz.

Attempt saved. John McGinn (Aston Villa) left footed shot from outside the box is saved in the centre of the goal. Assisted by Emiliano Buendía.

Attempt saved. Aaron Lennon (Burnley) right footed shot from outside the box is saved in the centre of the goal.

Attempt blocked. Wout Weghorst (Burnley) right footed shot from the centre of the box is blocked. Assisted by Connor Roberts.