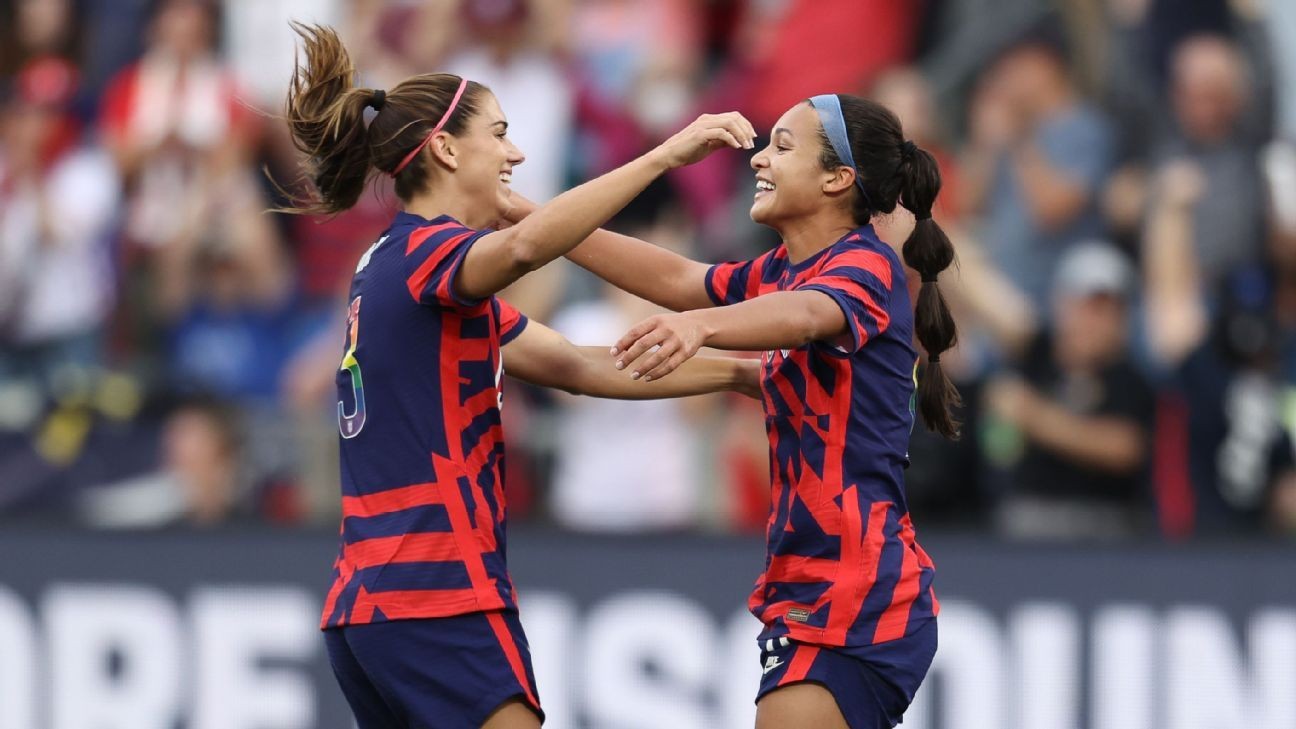 For the U.S. women's national team, all roads to the 2023 Women's World Cup and the 2024 Olympics run through Monterrey, Mexico, where the squad will begin its qualification campaign Monday.

If you've never heard of the CONCACAF W Championship, which runs July 4-18, there's a good reason for that: it's a brand new competition. But it's a pretty important one, specifically because of its new format: it will serve as the qualification tournament for both those aforementioned events, the first time CONCACAF has opted for a double-qualification format. The stakes have never been higher.

The tournament should be rather forgiving for the Americans. The top four teams in the eight-team tournament qualify automatically for the 2023 Women's World Cup co-hosted by Australia and New Zealand, meaning the USWNT only needs to survive the group stage. But qualifying for the Olympics is where it gets trickier: only the winner of the tournament will directly qualify for Paris 2024. The second- and third-placed teams are not out of it -- they will compete in a playoff to be held in September 2023 for the second and final CONCACAF spot -- but the U.S. would surely like to get qualifying over with, if possible.

Here is a look at the key questions facing the U.S. heading into the tournament:

Who will lead the USWNT into the future?

Coach Vlatko Andonovski has not been shy to cast veterans aside in favor of younger talent that's tearing up the National Women's Soccer League in 2022. Tobin Heath was not called in for these qualifiers and although Christen Press tore an ACL shortly before the roster was announced, Andonovski said he wasn't planning to call her in anyway.

Instead, newer players like Sophia Smith, Ashley Sanchez and Trinity Rodman are being asked to lead the attack, and they've looked plenty capable. (Mallory Pugh isn't new, but after years on the outs with the national team, she is back and looking like a new player, too.)

Huge summer of women's soccer: Your guide to Euros, USWNT qualifiers and more9dESPNESPN FC Women's Rank: The best 50 players in the world6dESPNThe U.S. already won a World Cup in 2022: Inside the brilliant world of CP soccer21hSam Marsden

It was a major blow to Andonovski's planned youth movement when Catarina Macario tore an ACL last month, but the USWNT showed off plenty of threats when it won the SheBelieves Cup in February with a roster mostly devoid of veteran attackers. However, when it came time to select this qualifying roster, Andonovski couldn't move on from Alex Morgan, who has been off to her best club start in her entire career at age 33, scoring 11 in 10 games. Megan Rapinoe, at 36 (turning 37 on Tuesday), may no longer be a 90-minute starter, but Andonovski was clear that he felt she brings something special and unpredictable to the table. That veteran presence is still needed, it seems.

So who is going to lead the way to the next World Cup and Olympics? The U.S. had the oldest squads at the past two World Cups (and won both of them) but Andonovski seems determined to go a different route. For the first time since they joined the team, veterans such as Morgan are not guaranteed minutes, let alone roster spots, but it will come down to who scores, who leads, and who makes the most impact.

Alex Morgan is on this squad but youngsters such as Sophia Smith will lead the USWNT for years to come. Omar Vega/Getty ImagesIs the USWNT ready for its next goalkeeper transition?

Alyssa Naeher has been the USWNT's starting goalkeeper since late 2016, the successor to a role held by Hope Solo for the better part of a decade. So when the 34-year-old was injured during the Olympics last year, the safe assumption was that she'd be the starter once she was healthy again. However, that's still only an assumption as the USWNT's recent matches, and Andonovski's own words, have provided little clarity.

Recently, everywhere Andonovski has been able to find a younger player to take over a role, he has taken that chance. Defenders Naomi Girma and Alana Cook, who each had single-digit caps when they made this qualification roster, will probably get significant minutes in Mexico. Morgan was on fire in the NWSL but Andonovski still resisted calling her up for friendlies, opting to give new players a chance. So why should goalkeeper be any different?

Casey Murphy, the 26-year-old North Carolina Courage keeper, has made a strong case in the NWSL, and she got the nod to start for the U.S. in a pre-qualification warm-up against Colombia.

Can Mexico or Canada spoil the USWNT's chances?

Let's be clear: the U.S. should absolutely qualify for the World Cup by the time they leave Mexico. The Americans have never failed to qualify for a Women's World Cup since FIFA started the event, and as the No. 1-ranked team in the world, it's certainly not too much to ask for the U.S. to finish in the top four in Monterrey either.

Qualifying for the Olympics is well within reach as well. Of the nine previous CONCACAF tournaments the USWNT has competed in, they won eight of them. But that one they didn't win in 2010 is where it gets interesting. The U.S. suffered a shock loss to Mexico and could not qualify directly for the World Cup: that time around, the Americans had to face Italy in a home-and-away playoff to clinch their spot.

Sebastian Salazar feels USWNT's Trinity Rodman has the potential to become one of the top stars of U.S. soccer.

While Mexico are considered likely to qualify for the World Cup themselves at home and are poised to eventually see the benefit of their domestic league, Liga MX Femenil, Mexico is drawn into the same group as the U.S., so the Americans won't even see them in the knockout round.

Instead the team to focus on here is Canada. After winning gold at the Olympics last year, there's no longer any dispute that Canada should be considered a dominant team in women's soccer. Their style of play may be a more a gritty and defensive approach than their American counterparts -- their road to gold in Japan wasn't paved in many goals through the knockout rounds -- but it can be extraordinarily effective nonetheless, especially against teams that like to attack, like the USWNT. The U.S., remember, had to settle for a bronze medal in the same Olympics after repeated stumbles.

It's easy to envision a Canada-U.S. final with an automatic Olympic qualifying spot on the line and at that point, it could go either way.