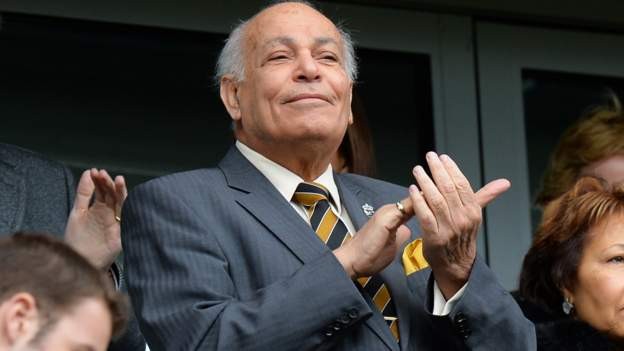 Allam, 82, and his son Ehab, sold the club to the Turkey-based Acun Medya Group on Wednesday, ending a tenure that lasted just over 11 years.

Their time in charge, during which Hull twice won promotion to the Premier League, saw them controversially try to change the club's name.

Their attempts to rebrand as Hull Tigers - after the club's nickname - were rejected twice by the FA.

"When you are a Premier League club you should act globally, it's a global thing.

"If you're below [the] Premier League, you're a local club. A local club, I would say (of) Hull City."

The family took over the club when it was in financial distress, having been relegated from the top flight in 2010. But three seasons later they returned to the Premier League after finishing second in the Championship under manager Steve Bruce.

Their plan to change the club's name drew protests from the club's supporters and Allam said in 2014 that he would try to sell the club after it was rejected for the first time by the Football Association.

They reached the FA Cup final in the same year but were relegated back to the Championship in 2015, although they immediately bounced back for a further season in the top flight after winning the 2016 play-off final.

On their return to the Championship, the club struggled and finished bottom in 2020 before winning the League One title last season.

Despite repeated protests against his ownership - which he claims came from 10% of the club's support - Allam said those fans were still vital to the club.

"It's a small number, but they are a very important number by the way," stressed Allam, who has also donated millions to local projects in Hull.

"They are the fans who travel with the club, who support the away games, so I would like to thank the fans for supporting me and supporting the club and equally I'm thanking all the fans for chanting against me because we need them."